Lacking a sure path, the industry succumbed to trends and counter-trends.  In the early 90s step-aerobics hit health clubs claiming to be the answer to knee problems.  After a decade of step-aerobics, however, its students noticed that their bodies were not only failing to become more buff.  Many were seeing negative results: a chunky appearance, tight, graceless muscles and pain in their knees in spite of the impact reduction the step was supposed to deliver.
Enter the resurgence of yoga in the 90s as a correction to step, replacing loud disco music and latex with stretching, peace of mind and softer workout clothes.  The problem with this next development is that yoga is not exercise but rather a physical form of meditation.  To redress the problem, yogis tweaked the format to better resemble exercise.  Yoga became power yoga, hot yoga, flow yoga and so on, but the essential nature of yoga remained.  Its colorfully-named postures randomly conformed, or failed to conform, to the human muscular system.

When it came to giving its students better bodies, its strong points as an exercise system were found lacking.  Nowhere in yoga, to name two shortcomings, is there either effective strengthening for the abdominals and glutes, or are there techniques for burning fat.

Which brings us to Pilates, a system that finally seemed to understand abdominals.  Joseph Pilates began his work by designing exercise machines in Germany during World War I using old hospital beds.  Later in New York he used his machines to rehabilitate dancers.  More than any other exercise trend, Pilates’s popularity typifies the reactive nature of recent exercise design.  Americans went from jumping up and down on steps, to leaning down into poses and now to lying down completely.  This new laid-back format addressed the need for core work, but at a cost, and not just a monetary one.

By placing its students in a prone position, Pilates removed the weight-bearing element from exercise and with it exercise’s role in helping the body burn away fat, including abdominal fat.  Pilates’ focus on the abs also misses the forest for the trees.  The back, shoulders, glutes, hamstrings and thighs all play an essential role in aligning the body.  The original Pilates technique pays short shrift to these muscle groups to the detriment of overall control, balance and coordination.

In the late 90s Bikram yoga entered in response to the lack of strengthening in yoga.  Though heat and squats did increase the intensity of the experience, Bikram’s yoga poses remained the same old peaceful, muscle-surrendering lessons in relaxation.  The problem remained that none of these solutions by themselves effectively changed people’s bodies.  The exercise industry’s most recent solution: do it all.  In order to be fit, it declared, you need to do a combination of yoga, Pilates and aerobics.   Current books on star workouts typically feature trainers leading celebrities through this exercise trio.

There’s a catch, however, to this formula.  Compartmentalizing exercise elements allows two thirds of your system to rest while only one is working – and your body is never fully challenged.  Thus compartmentalized, exercise elements can never fully impact the state of the body.  And honestly, who besides the stars has time to do all three?  Clearly exercise has come to be driven not by physiology but by fad.

Certainly, the fitness industry has made a tremendous contribution to our health.  Be someone who exercises and you’ll look good, feel good and stay younger longer.  Yoga, pilates, working with weights, dancing, biking, hiking, boxing and hundreds of other physical activities – they all make you more fit.

What we are just discovering is how much exercise can do for you, and that’s where The Bar Method  comes in.  It set out not just to improve fitness but to maximize the potential of exercise to change your body for the better.  It looked beyond the trends and recognized the remarkable adaptability of our human bodies.  And it came up with the fitness industry’s first smart exercise system, one that integrates all five principle elements of fitness: stamina, strength, flexibility, body alignment, and coordination into one simple, gentle, hour-long workout that produces ground-breaking results. 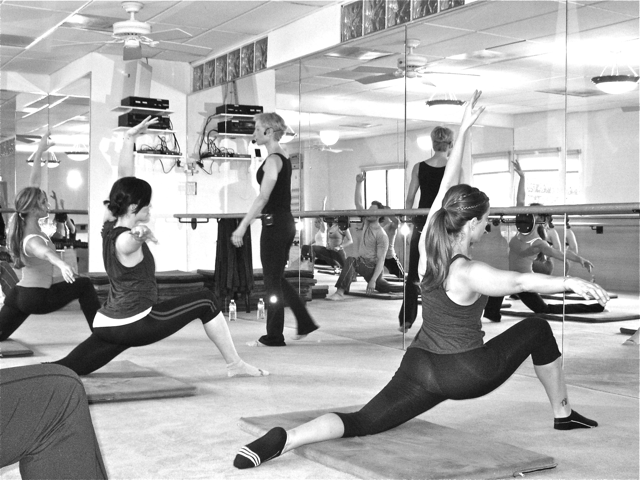