I will never forget training Joey Decker to teach the Bar Method. It was six years ago, and he was in a group I was training for the West Los Angeles studio. Joey is a professional dancer and choreographer. He has degrees in psychology, physiology, management, and massage and is a leader in the Landmark Forum. A day or two into the training session, I realized that he was no ordinary trainee. He was astonishingly high-energy, had an amazingly sharp eye for detail, and was uncompromisingly exacting – one of those people who is so bright he seems to immediately know more about your subject than you do – and you begin treat as a colleague. Have I mentioned that he has an amazing sense of humor?

Needless to say, Joey swallowed Bar Method technique in one gulp and quickly became a popular and charismatic teacher. Soon he was managing the LA studios, then training his own Bar Method groups. In 2009, he built his own beautiful and successful Bar Method studio in Burbank. He housed his dance studio, Dance Collaborative, and his dance company, Jaddco, within the walls of his Burbank space. 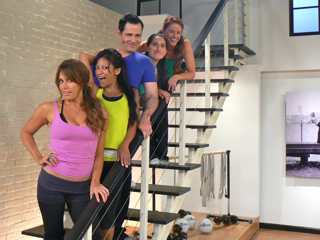 This spring when our new DVD workouts were in the planning stage, I knew I wanted Joey to lead one of them. The obvious choice would have been to assign him to an advanced workout. Instead, I asked him to lead our first DVD workout truly designed for beginners. I’m glad I did. I knew that Joey would keep his focus on form and technique and throw a few laughs in along the way.

Fittingly, Joey’s four supporting teacher/performers turned out to be an especially theatrical group. Jennifer Keyes is a professional dancer who you may have seen in 500 DAYS OF SUMMER or DANCING WITH THE STARS. Tiffany Baldwin is a singer/musician/actress who has done a lot of musical theater, among other work. I was delighted when Tiffany chose a flamboyantly sexy costume for the shoot rather than the usual trendy workout duds. The other performers were Joyce Miraflor, an energy healer, and Whitney Bania, co-owner of the very beautiful Newport Beach Bar Method studio. All of them have long hair and elected to wear it flowing around their shoulders. They exuded so much sparkle and glam I almost wondered if they were planning to sneak a song and dance number into the workout.

All this energy presented one technical problem: sweat! Our producer had advised all us performers to bring two tops to wear in case we sweated. Joey could have brought 10 tops, and he still would have been drenched.

“I sweated so much during the shoot,” he told me, “that I could hardly see while we were taping the standing seat exercise.”

During the breaks some of us pitched in with hair dryers to keep at least one top in service.

In the end, I’m so glad I chose this lively crew to create a thoroughly instructional Bar Method home workout. The Bar Method is a form-based technique. You have to be in the correct position to benefit from it. The two current DVDs do explain correct positioning, but they only go so far. Joey’s beginner’s workout goes a step farther by breaking down the form in such as way as to give home users who’ve never taken the Bar Method the tools to really embody it. 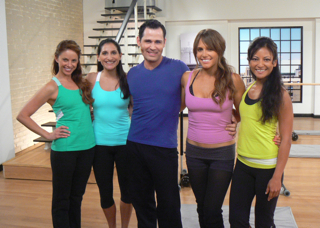 Nonetheless, the level of challenge in this workout – thanks to Joey — will surprise even strong students.

After the shoot, Whitney told me, “The simplest movements and choreography still made me burn and shake – I couldn’t hide my shaky legs in the second shoot! Participating in the Beginner’s DVD,” she added, “brought me back to the basics and reminded me of their importance.”