Some time in 2009 my business partner Carl Diehl and I started talking about making more Bar Method workout DVDs. We’d already made two other sets of exercise DVDs in 2003 and 2008. So I was aware of the tremendous energy and focus required to produce them. Exercise DVDs are like small movies. You need to find a good director, a producer, a project manager, a coordinator, a composer, a sound stage, talent, and a crew. You have to create a concept and write the scripts, design the set, assemble the talent, figure out a rehearsal schedule, and work out the costuming. You have to create a budget.

Not only that, performing in exercise DVDs is harder than you’d think. Directors have told me that exercise DVD performers who’ve taught their routines thousands of times to their students are often struggle in front of a camera, and I’m no exception. In both 2003 and 2008 I was surprised at how tricky it was to present The Bar Method to an invisible audience.

This time, I wanted create workouts that more closely resembled the fun, fast-moving classes at Bar Method studios. I decided to create two really hard “advanced” workouts, which even the strongest Bar Method students would find challenging. In addition we’d shoot a beginner’s workout and a pregnancy workout. I’d hire a hip director and composer and feature a larger cast of performers. 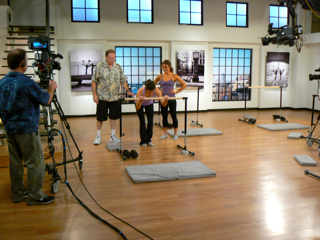 By April, we’d located a director that Carl and I both connected to: Packy McFarland, an award-winning creator of instructional videos and infomercials, who enlisted his detail-oriented technical producer, Ted Baker. The picture at the left shows Packy in action on the set.

After taking such a big step, we seemed not to know what to do next.

“You need to write the scripts,” Carl would tell me.

“How can I free up some time for you?” he’d say with increasing urgency.

Finally, some time in May, the project came to life. I emailed two wonderful Bar Method teachers based in LA who have performance backgrounds and invited them to lead two of the DVDs. They are Marnie Alton, an actress, singer and song-writer, and Joey Decker, owner of the Burbank studio and director of his own dance company. Both accepted. Later, Lee Potter in her third trimester with twins (more about that later) agreed to do the pre-natal workout dvd.

Then I started inviting great Bar Method teachers from all over California – and one from Portland – to be the non-speaking performers and all of them said yes. I ended up with enough performers to create an entirely different cast for each of the four DVDs.

Somewhere along the line, Carl and I made a decision we’ve been 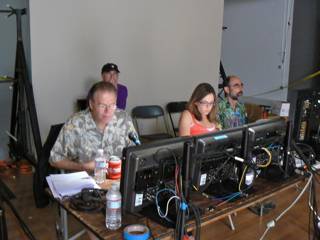 very happy with: we hired Michael Doud, my boyfriend, to be project manager of the DVD production. Michael, who also manages our SF Marina studio, has decades of experience as a project manager, plus he has a special knack for working with people. He immediately tightened up the organization of the project and got it moving. Carl was especially happy to pass over to Michael the task of standing over me to make sure I got the scripts written. I myself will forever be grateful to Michael for getting the composing of the music back on track. That job has been mine, but I’d gotten too busy to keep it organized. Thanks to Michael, our very talented composer, Mike Licari, ended up knowing exactly what I wanted and producing beautiful sound tracks for each workout. The picture above shows on the left the director Packy, sitting behind him project manager Michael, in the orange shirt Kelsey manning the time code, and next to her technical producer Ted. 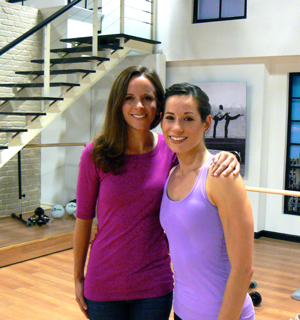 Our DVD project was also blessed with an amazing coordinator, Rebecca Chatfield-Taylor, who is also my assistant as well as a terrific Bar Method teacher. You can see her with her arm around one of the performers in the picture on the left. In her role as coordinator, Rebecca put together the artwork for the set, figured out the costuming for the 18 members of the cast, arranged flights, hotels and other travel, and assembled the bars, weights, mats, balls, straps, cushions and other equipment for transport to LA. During the shoot she sat next to the cameras and help us count the correct number of reps for each exercise. Her calm, smiling face was a tremendous support to me and all the other lead performers.

On Friday, July 9th, when the shoot was complete and we were packing up, it occurred to me why actors spend so much time thanking people. I realized that the production team, not me, was the entity that had adapted my ideas and brought them to life.

In the following weeks: behind the scenes during the making of the DVDs.