The Bar Method started offering specially designed pre-natal classes in 2003. Since then, I’ve probably taught more of them than any other teacher. So when it came to putting our pre-natal class on DVD, I assumed I would be the one to lead it. My challenge would be to find a few Bar Method teachers who happened to be pregnant and who would be willing to come to LA to act as my backup performers.
The first person I thought of was Lee Potter. Lee is a tall, beautiful, vivacious lawyer specializing in litigation. She is also the mother of a one-year-old. Lee has been a Bar Method teacher since 2007 and is currently pregnant with twins, a boy and a girl, who are due in September. When I invited Lee to perform in the DVD, she practically jumped for joy. 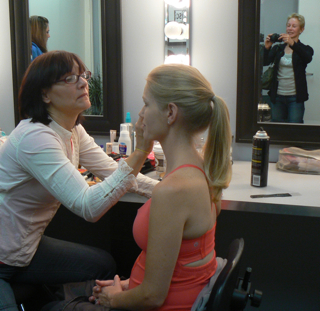 Next I invited Hannah Blue (at left) to join the team. Hannah is one of the co-owners of the Downtown San Francisco studio and is pregnant with her first child, a boy, due to be born in October. One of Hannah’s teachers, Lauren Dunning, is in her second trimester with her second child, a girl, and agreed to be my third back-up. As luck would have it, Hannah and Lauren both look like super-models. The three of them together were going to make pregnancy look like a beauty fix just by standing there.

Even so, something was terribly wrong with my concept for this DVD. Fortunately, the problem dawned on me before it was too late to fix one Saturday morning about six weeks before the shoot. That day, I took a Level 2 class, and the teacher happened to be Lee. As I struggled through Lee’s wickedly challenging moves, I became more and more transfixed by her. First of all, her performance was amazing. She was witty, articulate, regal, and totally at-home in front of everyone. She was wearing a lavender pre-natal exercise top and looked gorgeous. Then it hit me. Lee (shown at center below) should be the lead performer and, the truth is, at age 63 I didn’t exactly look the part. 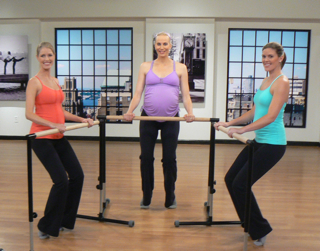 lead. To say she was glad to accept would be an understatement. She threw herself into the project like there was no tomorrow. She watched exercise DVDs currently on the market by the dozens. She came to the studio every day and practiced. Like a lawyer preparing for a consequential trial, she sculpted every word of her presentation.

The day of the shoot, Lee wore her lavender top, Lauren wore blue, and Hannah wore pink. I heard several members of the crew whisper, “who knew pregnant ladies could look so beautiful?”

As soon as the cameras rolled, Lee commanded the stage as calmly as if she were hosting a party in her home.  I knew for sure at that moment the Pregnancy DVD would be a hit. 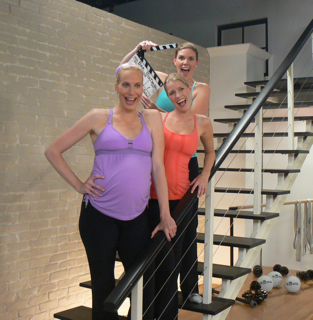 Lee’s performance turned out to be the smoothest and wittiest of them all. To spice things up she sprinkled into the workout funny quips about the being pregnant, such as:

Press back with your arms as if you were nudging “those people in the super-marketing who reach out and touch your belly without asking.”

“This exercise will help you lift your seat, or at least not make it bigger than it is right now.”

“Come on, this is nothing compared to labor!”

In this country there are, at any given time, around four and a half million pregnant women. Thanks to Lee, these women will soon have a wonderful new option both for making their pregnancies a better experience and for helping them bounce back faster.

Click here to read why pre-natal exercise is so good for Mom and Baby.