Mike Najjar was the first teacher I invited to perform in the DVD workout that I would be leading during our four-DVD shoot this month. Mike has been teaching at both San Francisco studios since 2007. When he’s not wearing his Bar Method Instructor hat, he is also an institutional sales representative in the financial sector. I wanted Mike as a performer because he projects great personal warmth, takes class five times a week, and loves the Bar Method. He turned out to be not only a good performer, but very helpful to our team. During the rehearsals, each of us took turns watching the run-throughs and giving us notes regarding how well we were representing the correct form of the exercises and were in sync with each other.
Mike was both supportive and honest with his feedback.

A “tic” is an unnecessary word or phrase that Bar Method teachers say unconsciously again and again like “go ahead and,” “I want you to,” and “good.” I certainly didn’t want to have tics in my DVD!

“Really?” I responded. “I don’t hear myself saying it.”

We ran through the workout again, and there it was. I WAS constantly saying “and then.” Thanks to Mike, I will not subject the users of my DVDs with a cascade of “and then”‘s.

The other members of my group had similarly sweet personalities. 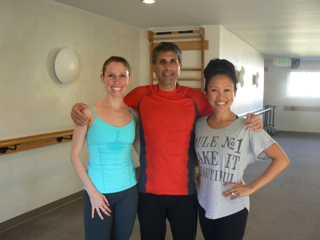 Tera Roth, a teacher at the Downtown San Francisco studio, is studying for her doctorate in physical therapy and is on the left of Mike. Keryun Su, one of my teachers at the SF Marina studio, is an IT project manager whose husband Duke was the subject of one of my previous blogs. She is on the right in this picture. Chelsea Glavinovich, in the picture below, is an amazing, high-energy studio owner who is always cheerful and smiling even though she runs two East San Francisco Bay studios, leads training groups all over the country, bikes competitively, and as of late finds the time to plan her upcoming wedding in early October. 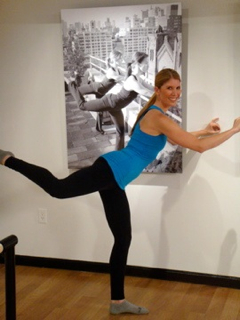 This DVD workout is one of the advanced routines. I named it “Super-Sculpting” because it is an especially targeted workouts, even for a Bar Method class. For example, we not only do “pretzel, which is already a highly effective seat exercise. We give it an extra kick with the use of a ball. Similarly we used our balls to add challenge in thigh-work, abs and “back-dancing.””Super-Sculpting” had its intended effect on our bodies.

“I was more sore after each DVD practice,” Chelsea told me, “than I have been in recent memory.”

I myself noticed that our “Super-Sculpting” rehearsals added definition to my seat and arms.

On July 7th, the day of our shoot, the five of us met up in the make-up room of the sound-stage in Van Nuys, California, north of Los Angeles. This is where Mike met his biggest challenge as a performer: make-up!

“I never wore makeup before,” he confessed. “I kept smearing it 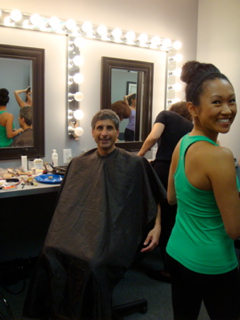 when I touched my face. Also got a bad taste in my mouth from the lip stuff.”

His discomfort got him a certain amount of ribbing from his fellow performers.

“It was pretty funny,” Tera told me.

The shoot itself went smoother those I’d done in the past. I attribute this improvement to our super-organized new production team.

“I thought it was very efficient and well run,” Mike told me after he’d removed his make-up. “I would do it again in a heartbeat.”

I hope users of “Super-Sculpting” will have as much fun – and get the same great results – as my performers and I did making it.

Next week: Joey Decker and his beginner’s workout.