Manhattan is the most human-friendly city I know. It packs people into a cozy vertical architecture that’s both spectacular and womb-like. I loved being a New Yorker when I was in my 30s. It was during that time that I took my first Lotte Berk Method class in its brownstone studio on the Upper East Side. 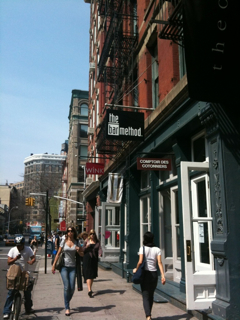 Almost 30 years later, The Lotte Berk Method no longer exists in New York, but the Bar Method, which is based on its exercises, has brought an updated version of its workout to cities around the country.

This Saturday, April 24th, 2010, the Bar Method’s journey will come full circle when its first Manhattan, NY studio opens on 155 Spring Street in SoHo. Like the original Lotte Berk Method studio, the SoHo space is on the second floor. Its 7844 square-foot space holds three studio rooms like that of its predecessor, but these rooms are much larger. The style of the Bar Method space is very “New York” with several exposed brick walls and windows looking out over shops, but there is also comfort and luxury, including four showers in the women’s locker room and one in the men’s. Subway stops for lines 6, A, C, and E are a few blocks away.

The studio’s best two features have nothing to do with its physical setting.  They are its two owners, Amy Duffy and Kristin Kelleher, who happen to be two of the Bar Method’s most talented and beloved teachers. I will never forget the day I met Amy Duffey when she interviewed for an instructor position in 2001. Most of teacher-trainees are recruited from our student population. Brand new studios however, having no students to draw from, reach out for their first teachers via ads in the paper or on the internet. Amy responded to such an ad for our San Francisco studio, which my business partner Carl and I were building that summer. She walked through our studio’s front door past the rubble and construction dust and just blew us away. Once we got past the fact that she is strikingly beautiful, we noticed that she possessed a unique combination of charisma, good humor, and delightful wittiness. She had us at “hello.”

As you might guess, Amy, a former dancer and psychotherapist, became a wonderful teacher. As a plus she turned out to be very musical. Students lined up to take her classes. 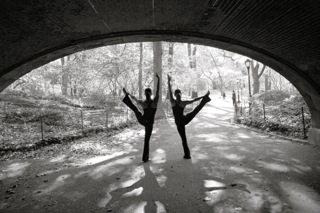 Four years later, in 2005, we brought another exceptionally talented teacher aboard. This time with our studio in full swing, we were able to extend invitations to our most promising students. Kristin Kelleher was one of these. At first Kristin agreed only to teach before and after her job, since she loved her career as a staffing consultant and had no plans leave it. Teaching the Bar Method changed her mind. “What I found shortly after I became a teacher was that I just loved it and wanted to do more,” Kristin remembers. “I had to be passionate about whatever I chose to do for a living, and I became more passionate about the Bar Method.”

In December of 2008 Amy and Kristin uprooted themselves from San Francisco and took on New York. It was at first a difficult transition for both of them. “I didn’t know anyone,” Amy remembers. Kristin, meanwhile, had just arrived in New York when her mother suffered a stroke (from which she is now recovered). “It turned my life upside down,” she recalls. “Fortunately the Bar Method and my relationship with Amy has kept my spirits up. It’s pretty amazing that I have such a beautiful partner.”

Amy and Kristin are no longer strangers in their area. Over the past year, they have found the time to teach regularly at the six other Bar Method studios in the Tri-state area. When I asked them how they felt about their upcoming opening, both of them told me that they are most looking forward to bringing the Bar Method’s standard of excellence to the city. “I don’t think bar fitness exists in New York City the way we can do it,” Amy said. “That’s very exciting.”

Click here to find out more about The Bar Method SoHo, NYC and to view the schedule and make reservations.