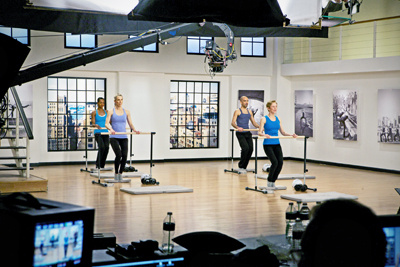 This month I finished shooting two new Bar Method DVD workouts with me as the lead performer, which will be coming out in April. What I enjoyed most about making this set is that they are pegged to be intermediate-to-advanced, so when it came to designing the routines I could pick from just about any exercise in the Bar Method and even create new ones if I wished. I love using the ball in Bar Method classes, so I used it throughout both workouts. Pretzel is one of my favorite exercises, so it went right into the first Super Sculpting routine. Super Sculpting II includes “diagonal seat,” a recently developed Bar Method exercise that never fails to hit me in all the right places. For curl I chose variations that look beautiful when you’re doing them, that are really challenging, and that are different from the ab-work in the other DVDs.

When the choreography was in place and I stood back and looked at both routines as whole, I was pleased to see that they each ended up with a different focus. Super Sculpting concentrates on toning. “SS II” moves faster and is more aerobic. Each DVD includes a set of aerobic exercises mid-point through the workout. SS II takes its fat-burning component one step farther by adding one more set of thigh-work, a second “seat” exercise designed to elevate the heart-rate, and a few “zingers” (Bar Method speak for short, fun, surprising and extra hard moves) during the ab section. 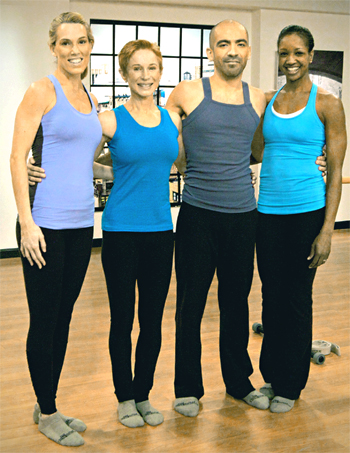 What did I find hardest about the DVD production process? Rehearsing! I was lucky to have a different group of terrific Bar Method teachers for each DVD to help me get through this stage. Both teams encouraged me as I fumbled through the first few run-throughs and continued to support me all the way through the two back-to-back on-camera performances we finally did for each DVD. In a blog I wrote last summer I described my wonderful Super Sculpting team (See “Making the €˜Super Sculpting’ Exercise DVD.”). Now I’d like to tell you about my amazing Super Sculpting II performers.

Super Sculpting II as I mentioned is a workout that highlights the fat-burning power of the Bar Method. Fittingly as it turned out, the three teachers who signed on to do it with me are all built like racehorses. Sharon Demko has danced most of her life and has the body to show it. She started teaching at my Bar Method studio in the San Francisco Marina eight years ago when she was the mother of a one-year-old son. A few years later she taught through most of her second pregnancy. Now her sons are nine and six, and Sharon is as slender and defined as I’ve ever seen her. 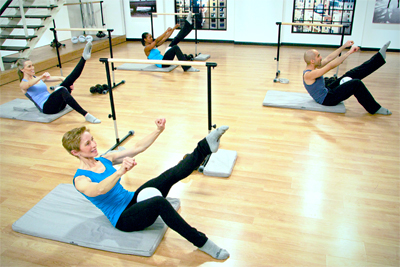 Kiesha Ramey-Presner, also a San Francisco Marina teacher, is the mother of a 15-month-old son named Dylan. Kiesha has one of those spectacular model’s bodies that looks like it’s been long and lean from birth. She started taking the Bar Method five years ago not to change her body but because she was looking for an overall workout she would enjoy as much as she had running. “I was surprised when I ended up dropping one jean size,” she told me. “And I got so much stronger, to a pentacle of strength.”

Juan Barba, a senior teacher at the Burbank, California studio, is quietly charming, “scary-smart,” and a true Bar Method fanatic. In his three years as a Bar Method teacher, he has noticeably buffed up from doing the workout (and nothing else, he says). To me he is living proof that the Bar Method can and does significantly change men’s bodies.

Next week: The Super Sculpting II performers talk about their hardest and funniest moments during the shoot. Stay tuned…