Recently I’ve had the pleasure of visiting two Bar Method studios that just opened in cities that are on opposite corners of the North American continent. Both Bar Method facilities, one in Vancouver, the other in Miami, had been in operation about a month when I arrived, and both are already thriving.
Despite their distance from one another, the Vancouver and Miami studios struck me as remarkably similar. I wondered if their shared features had anything to do with their mutual success and realized on closer observation that the answer is yes. The qualities the two studios have in common are notable for what they reveal about how successful Bar Method studios work.

The cities where these studios are located were certainly not among their similarities. Vancouver was misty, ethereal, cosmopolitan and architecturally awesome. It snowed when I was there. Miami seemed lived-in, colorful, hip and fun-loving. The “cold snap” everyone said they were having turned out to be in the 70s and sunny. Nonetheless the two Bar Method studios were almost identical in layout and size, each with two studio rooms, each exquisitely designed with great attention to detail and finished with color accents that reflect their cities’ personalities: cool neutrals in Vancouver and bright turquoise in Miami. 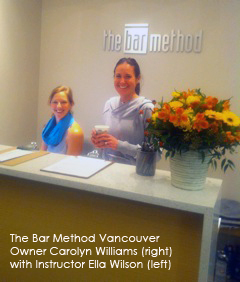 The owners themselves are where the most striking similarities begin. Both are beautiful, 32 year-old women who left successful professional careers to become their own bosses. Carolyn Williams, the owner of the Vancouver studio, was a Senior Merchant with Lululemon. Sherri DiMarco, the Miami studio owner, was a corporate lawyer specializing in mergers and acquisitions. Carolyn and Sherri felt something was missing in their careers in the corporate world. They wanted to make a difference in people’s lives. Now, as Sherri told me this weekend, “I gain so much more satisfaction from watching my clients change their bodies and their habits than from closing multi-million dollar deals.”

Studio owners with these kinds of backgrounds are a boon for the Bar Method because they bring with them intelligence, drive, discipline, integrity and leadership skills, and the outcome is invariably outstanding. During these two visits both studio owners surpassed my expectations. Carolyn started her teacher training last January with muscles that had become tight from having been a competitive runner. When I walked into her studio a few weeks ago, I was amazed to see that she had transformed her body into one that is now elongated and straight. “It took a lot of work and self-observation,” she told me when I commented on the change. 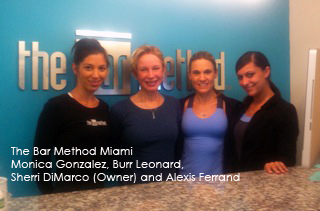 In Miami Sherri (shown right with Monica Gonzalez, Burr and Alexis Ferrand) had her own surprise waiting for me. Her two young teachers, Miami residents Monica Gonzalez, 27, and Alexis Ferrand, 23, had attended a training group I led in New Jersey last April knowing practically nothing about the Bar Method. Neither had ever attended a Bar Method class and needed to learn everything from scratch. This weekend I watched Monica and Alexis each teach a class and I was blown away. Under Sherri’s relentlessly enthusiastic guidance, they have turned themselves into skilled and dynamic teachers. When I asked Monica how she did it, she gave me two answers. First “I memorized the manual” (200-plus pages of dense text), and second, “Sherri was inspirational.” 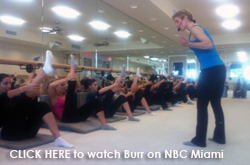 What most impressed me was the dedication Carolyn and Sherri gave to learning the Bar Method technique. Part of the magic of a Bar Method class, above and beyond its wonderful technique, is in the beauty of its teaching. Both owners took the teaching skills seriously and blew me away by having mastered them and inspiring their teaching staff to do the same. We’re lucky to have them aboard.