Last weekend I had the pleasure of visiting two brand new Bar Method studios, both in Southern California. I’d just finished shooting two new Bar Method DVD workouts, at a production studio just north of LA. The DVDs, “Super Sculpting 1 and 2,” will be released in April. We wrapped the shoot on Friday afternoon, and I walked out of the sound stage into a warm, sunny day and drove down the 405 to Palos Verdes, where the next morning I would teach three classes at the new studio located in that town. Afterwards I’d drive back up the 405 then 100 more miles up the coast to Santa Barbara where on Sunday I’d teach at the new studio there. 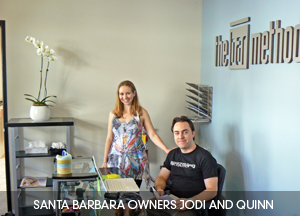 The two young owners of these studios, Millie Katic and Jodi Conroy, have much in common with each other. They are both pretty and petite. Millie, 33, is the mother of a year and a half year old daughter. Jodi, 28, is expecting her first child, a boy, in May. They opened their first studios in California towns where they lived or grew up – Millie in Hermosa Beach, Jodi in Agoura Hills. Both husbands (Darren Katic and Quinn Conroy) have pitched in to help oversee the build-outs and have even manned the front desk when needed. Last but not least, Millie and Jodi were both drawn to the charm and communal spirit of the two towns they chose for their second locations. 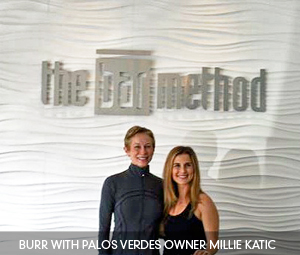 Palos Verdes, my first destination, is a not-quite-peninsula on the Pacific Ocean about an hour south of Los Angeles. Its residents have a reputation for loving their town so much that they rarely leave. This “PV” predilection for staying put was one of the inspirations for Millie’s wanting to location a studio there. Her Hermosa Beach studio is 12 miles north of Palos Verdes. Her “PV” students would drive to take class there but attend sporadically citing their reluctance to leave home. They begged her to open a studio in their town.

Millie accommodated them and opened her Palos Verdes studio on December 18th of last year. Her “PV” students kept their word to her and started attending class regularly, some of them five or six times a week.

On Saturday morning I walked into Millie’s studio and was knocked out by how beautiful it is. Millie and Darren clearly have a knack for stunning design, and they’ve been technically innovative as well. Instead of being stumped by the seeming impossibility of constructing a load-bearing bar across a series of floor-to-ceiling windows, they got creative. “In this challenge,” Millie says, “was born our €˜glass railing,’ which we have used now in both studios. This railing is an original design and solves the problem of placing a bar on any wall with windows€¦” The Palos Verdes studio features one of these amazing and beautiful devices on which the bar seems to float in space but is strong enough to support a line of students going all out during water-ski thigh or flat-back. 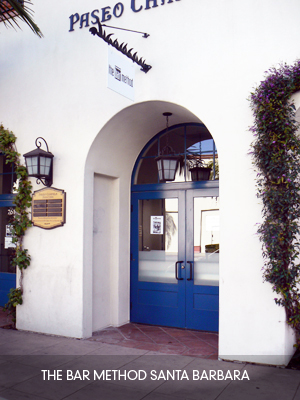 After my classes, I drove up the coast to Santa Barbara past scenery that looked like something out a fairytale — green, rolling, sun-soaked hills on my right, the ocean on my left. I got to Santa Barbara after a few hours on the road and found it to be as pretty and quaint as its surrounding countryside.

On Sunday Jodi and Quinn greeted me and gave a tour of the studio. Theirs, just like the one in Palos Verdes, is beautiful, spacious and exquisitely designed. My favorite feature: the huge, ornate windows that let floods of light into its two high-ceilinged studio rooms.

For a moment I thought, are Bar Method studio owners trying to outdo each other? These locations just keep getting more and more beautiful. Then I realized with a smile, these new studios look so good in part due to our growing expertise at building them and in part to the amazing skills of my business partner, Carl Diehl, with whom I’ve been building studios for 20 years. In our partnership I’m the one in charge of the exercise and teaching methods. Carl designs the studios. He’s always had an amazing ability to walk into a raw or broken up site and envision how a studio would fit into it. Now, after doing this at hundreds of potential and eventual Bar Method locations, he’s become almost unbelievably good at it. 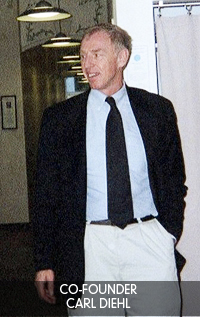 Millie and Jodi both did animated impressions of Carl walking into potential spaces, laser measuring tape in hand, to deem whether or not a studio would fit there. “He goes zap, zap, zap with the laser” they both said almost in the same words. “‘This goes here. That goes there. Gotta go.’ And off he flies to another space.” Millie’s studio had been a veterinary clinic that was broken up into 40 or so little cubicles. Carl seemed to see through the partitions and within moments had re-drawn the new walls. “How he can do that, I don’t know,” she said. Jodi’s space was originally three or four contiguous storefronts. “I had no idea it could work,” she said, “until Carl figured it out.” We had a good laugh, though mostly in appreciation for the collective expertise that we’ve acquired over the years and the beautiful results that have come from it.

My compliments, Millie, Darren, Jodi and Quinn, on your fantastic new studios!