Calories Burned During a Bar Method Class: Why it’s Not a Zero-Sum Game

CALORIES BURNED DURING A BAR METHOD CLASS: WHY IT’S NOT A ZERO-SUM GAME

One of the most commonly asked questions I get at the Bar Method is how many calories you burn during a workout. No scientific assessments of caloric burn-rate in Bar Method classes have yet been done, but here’s what I can tell you based on burn rates of comparable exercise techniques. A 125-pound woman in good shape burns about 350 calories with the Bar Method DVD workouts (and closer to 400 calories in a beginning/intermediate studio class due to the faster pace). In addition, Bar Method workouts give an approximately 100-calorie additional post-workout burn-off from the build-up of lactic acid.

Advanced classes burn more, as a Bar Method student named Kristen reported a few years ago. “I wore my heart rate monitor for a couple of level two classes, and burned almost 500 calories [per class];” she said. “I burn about 600 on an hour long run.” Another student, a guy who took his first class wearing a heart rate monitor, told me he burned 800 calories. Students in other bar fitness classes who wore calorie counting devices reported burn-offs of between 136 and 701 calories.

The variation in these numbers is due to differences in these students’ body size, gender, age, muscle mass, level of fitness, when they last ate, the level of the class, their familiarity with the workout, etc. Another reason for the variation in results is the heart rate monitors themselves. As one researcher wrote, “All caloric expenditure information that you read off of a heart monitor or an exercise machine like a treadmill or indoor bike, are estimates of calories spent and usually not very accurate.”

Nevertheless people are fascinated by the idea that we can make a zero-sum game of calories in/calories out, but in practice, this approach may not live up to all the interest it generates. If we could actually tweak our caloric intake and outtake by measuring it – even if heart rate monitors were 100% accurate — it wouldn’t matter how many extra calories we burned in a particular workout. As long as we burn at least some additional calories, they’d add up, and we’d lose weight sooner or later. The truth is, weight loss doesn’t routinely result from exercise, not because of our inability to measure calories “out,” but because of our inability to control calories “in.” The real culprit is, in a word, food. Our deep attachment to this substance has ways of tricking us into refueling after we work out in spite of our intentions. Consider two of food’s lesser strategies for getting us to eat:

Food as pleasure: Many people grow to expect a certain amount of pleasure from food, apart from their need to satisfy their hunger, so that it becomes an entitlement. We ate dessert as children and through sheer habit feel we warrant it indefinitely. TV commercials play to this mindset by showing us beautiful young women eating candy as if it contained the secret of happiness.

Food as comfort: The comforting feeling food gives us can serve an emotional sedative. In the new movie “No Strings Attached” Natalie Portman, when upset with her love life, wolfs down three boxes of donut holes. Donut holes are 220 calories each, and let’s say there are six of them per box. That would mean that she’d be consuming almost 4,000 calories, two days worth of fuel, to make herself feel better (great movie by the way – except that it was hard to believe that Natalie Portland’s size zero character ever ate an excess calorie in her life).

If these emotional addictions to food don’t do the trick of seducing us into replacing our calories just burned off, food pulls out its big guns, namely hunger pangs. After an intense workout, hunger will scream at you to replace those calories. Even if you succeed in resisting the Starbucks Venti White Chocolate Mocha (630 calories), you might distractedly go for a second helping at dinner or an extra piece of the birthday cake served at the office, all devoured before you put much thought into doing so.

The good news in this state of affairs is that exercise absolutely will change your body dramatically if you commit to it for the long term. Numerous studies made of people over decades have found that those who lead sedentary lives tend to gain weight from age 30 – 60 while those who exercise stay lean and youthful. Other research found that exercise performed regularly has appetite-suppressing qualities.

I’d like to add that Bar Method workout in particular includes a few additional features that help you lose weight and keep it off. 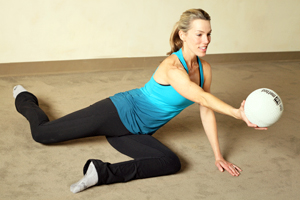 None of these weight-control techniques involve calculating calories but there is plenty of evidence that they work. Thousands of Bar Method students have transformed their bodies, and hundreds have written in to tell us about it.

About The Author Bar Method

Over 100 studios in the US and Canada FIND YOUR STUDIO

Training for a Marathon? Here’s How Barre Can Help

3 New Moves to Kick Off the New Year

Three New Bar Method Moves You Can Do Anywhere