The Bar Method, by virtue of its ballet bar, is uniquely equipped for core work. When students hold challenging muscle-building poses at the bar, their bodies have no choice but to call their core muscles into action.
Take glute work, an essential component of core strengthening:
The bar is the Bar Method’s secret “butt kicking” weapon.  Not only are the glutes extremely tough, as I mentioned last week.   There’s also not much range of motion back there, so once you contract your glutes, there’s pretty much nowhere else to go with them. (Contrast this situation with the ability of our thighs on the other side of our bodies to bend.)  Even so, our glutes work most effectively while they’re contracted.

This fact seems self-evident, until you look at how other systems’ design glute work.  Lunges, squats, nautilus machines all bend the body forward at the hips, letting glutes lose their contraction with every rep.  This same “on-off” repetition-oriented formula ends up emulating what our rears do when we walk – turn on and off with every step.  Bottom line, Pilates, nautilus machines, toning workouts, even “buns of steel” DVDs, rarely address the true nature of our glutes.  The result: lots of time spent at the gym without results.

The Bar Method avoids these two pitfalls of glute-strengthening: that is, 1. frequent bending forward at the hips and 2. releases between reps.  Instead, it uses the ballet bar to keep the glutes deeply contracted for minutes at a time.  With the bar’s support, students maintain a sustained double-side glute contraction while 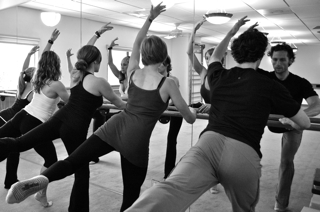 they lift one leg off the floor and hold it there for several minutes at a time.  The weight and power within the backs of both legs are in this way put into service as resistance against gravity and each other.  Looks easy but try it.  After several minutes of keeping the muscles “on” in this way, students often say they’ve discovered “muscles I never knew I had.”

While the glutes are on fire, the ballet bar is making multiple demands on students’ other core muscles.  Abs are hard at work holding students’ hips upright from the front.  Back muscles are stabilizing their spines as shoulders and arms use the bar to maintain balance.  Even upper torso muscles put their weight by helping grip the bar.  In contrast, seatwork in Pilates is often performed lying down, so that some posture muscles are not in play.

Finally, bar-work helps stabilize our bodies by strengthening an odd but important muscle located deep within our centers.  It’s called the iliopsoas, and while technically not a core muscle, it plays a key role in keeping us vertical.  When our iliopsoas, or more simply “psoas”, is strong and flexible, we stand straighter; our abs look flatter and our legs appear longer.  The reason many exercise routines miss the psoas is that it’s so deep inside us that you can’t really see, and you certainly can’t “shape” it visibly.  Not the Bar Method.  When students comment on how straight the Bar Method workout makes them feel, the reason is, in part, their stronger, longer and more functional “psoas”. 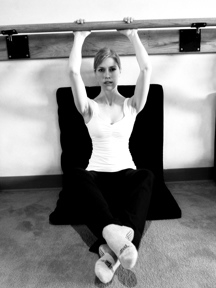 To the left you can see a Bar Method exercise that uses the bar to strengthen and stretch the psoas, while at the same time it tones the muscles directly above them, namely the abs. Again, because this exercise is performed at the bar, it’s simultaneously training your abdominal muscles to “turn on” when those in those in your hips, legs and torso need them.   Conversely, ab work in a lying down position, or on machines, is less effective for being less integrated with the rest of you.  So unless your workout gives you ample practice coordinating your limbs with your core, your abs could be strong, but you could still be missing out on the payoff during performance.