Finding and Flattening Your Abs

“I can’t feel my abs!” “When I try to pull in, nothing happens.” “My abs just aren’t changing.” I hear these statements from new students all the time. More than any other muscle group, the abdominals are typically the hardest ones for people to find, work and change. Even when the students’ themselves command their abs to get going, they seem to just sit there. Frustrating!
These people have come up against a maddening feature of our abdominals. They take their own sweet time to respond. In my experience, students’ abs typically take about four times longer than most other muscle groups to gain strength and look tighter. Why are they so slow on the uptake? The main reason is that they’re much thinner than other major muscles groups. You could (hypothetically) hold Arnold Schwarzenegger’s abdominals in one hand, while you could barely lift his quads. Their small mass makes it hard to get your brain around contracting them, especially when they’re weak. There’s not enough muscle fiber to get the job done. 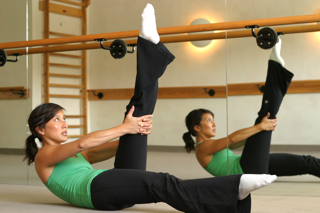 Fortunately our abs have a built-in solution to the problem of their puny size. Our deepest abdominal muscle, the transversus abdominis (“TA”) and our diaphragm are interconnected. This muscle-to-muscle relationship gives us all the ability to jump-start our abs by doing such things as sneezing, coughing, laughing or exhaling sharply with our diaphragm. Now you know why Bar Method teachers are always telling you to “exhale” as you work your abs.

I remember going through the process of getting my own abs up to speed during my first months as a Lotte Berk Method student in the early 80s. I would be doing the “curl” exercise, and the teacher would tell us, “exhale and pull in.” I would exhale, but my abs would not pull in. Then one day after coming to class regularly for about three months, I suddenly felt them come alive. When I later became a teacher, I noticed that many of my students also needed to concentrate on breathing and pulling in for the same three-month interval before their abs kicked in. Now I can happily reassure my beginning students that there’s nothing wrong with their abdominals. Tighter abs are on their way. Their biggest challenge in the meantime: patience!

Of course if you’re carrying excess intramuscular fat between the layers of your ab muscle, you have some additional work to do. Our bodies burn fat “systemically.” That is, it comes off our body as a whole. You can’t “spot” reduce fat. The best way to shrink your waist is to work your largest, most calorie-hungry muscle groups, specifically those in your upper legs and arms. Your abdominals on the other hand aren’t great calorie burners because they’re so thin, the better to wrap tightly around you.  So The Bar Method places ab work toward the end of its workout. That way, your already reved-up cardio-vascular system will continue to burn away fat as you focus on your breathing and pulling in.