Healing After Loss, One Student’s Story 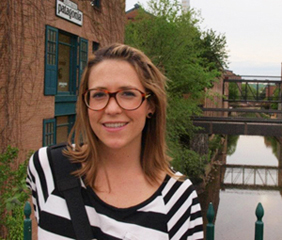 How does someone begin to heal from a broken heart? Elyse Arrington learned the hard way when a personal tragedy struck her last year. Elyse grew up in Salt Lake City and came New York City to study at Columbia University’s Teachers College. She became a Bar Method student three and a half years ago, taking classes both in her hometown and in New York. She was engaged to be married and about to begin her teaching career when suddenly her focus change. Recovering from loss, she realized, would be a process, and it called for her to find a safe haven where her spirit could gradually reconstruct its place in the world. Elyse found such a place at the Bar Method. A few months ago, she wrote her Bar Method teachers at the New York Soho studio this thank you note:

“There is a certain kind of comfort in conformity. Not conformity in the mindless joining of the masses in prescribed rituals, but in routine, structure, and systematic movement.  That’s where the classes come in.  It was just over a year ago that I lost him; very sudden, without foresight or warning because, I guess, how can one be given warning of accidents and high rooftops with great views. It was just over a year ago that I fell out of pace with the rest of the world. I lost my footing in a once secure hold of love, life, and hope.  It’s hard to survive these things living in a swelling metropolis like New York City, where you are literally a face in a sea and a name on a class roster. And yet, everyone does it, every day—unbeknown to anyone else. It is a constant struggle to feel important, like what happens in your life matters, to see yourself as an individual, and try to build and grow connections with those other faces in the sea.

So, back to the classes.  I realized this the other day while sitting during round-back: here is a room full of beautiful women. I do not know their names, their jobs, or where they are from and they do not know me. I know nothing about them, other than the fact that we all chose to come to class on this particular day, at this particular time and that we are now connected by doing the same structured movement at the same time, systematically. And sitting there, knowing nothing of these women, I felt joined to them in spirit, physical exertion and intent. And that was pretty powerful. In that moment I realized the comfort that being in these classes has brought me.  After my fiancé died, everybody rationalized my devotion to BM as my attempt to “work out my pain and grief,” burn it off in the form of calories I suppose. But I realized that it was more than mere endorphins and sweat. Yes, that was part of it I’m sure, but it was the combination of all that along with a routine and structure that had been familiar to me over the past 3 years and had stayed the same across the country, as I moved from Utah back to New York. And in practicing that routine collectively, unspoken and relatively unacknowledged connections, social synapses, were being formed. When the majority of my life had shifted out of the realm of familiar and comfortable, and everything else had been tainted with the bitterness of grief, coming to class became one of the only places that offered me something concrete to hold on to—a bar perhaps? It was something I could count on and one place where conforming to class routines brought me comfort.  This message is not intended as an over-revealing story, but a great ‘thank you’ for being fabulous teachers and an overall great studio. See you in class—”

Thank you, Elyse, for sharing your story with all of us!