How The Bar Method’s Workout Can Help Knee Issues, Part 1

Bar Method students with knee issue fall into three groups: those whose knee pain lessens or disappears after a few months of classes; those whose knees improve when they use Bar Method modifications during class that are specially designed for their particular condition; and those who have knee disorders that need a doctor’s care. This third group can benefit from taking the Bar Method. However, they need to use more specialize modifications during class, and their knee issues will take longer to resolve.
The reason there is so much variation in the way knees respond to exercise is that the knee is simply a very complicated joint. A lot of very different things can go wrong with it, and in recent years knee injuries have become so widespread that they are now the most common musculoskeletal complaint that people bring to their doctor. Two trends have converged to cause this recent surge. First, collegiate and amateur sports such as soccer, skiing and off-road biking have become more competitive. Second, the people signing up for these sports have become less fit. In the last ten years for example, the number of high school age girls who play soccer has doubled while the overall level of physical fitness in this age group has declined. Today girls are five times more likely than boys to injure their knees while playing this sport.

Fortunately most students with knee issues fall into the first group, the one that responds quickly to the Bar Method workout. These students’ knees simply lack stability due to loose or damaged ligaments or arthritis. Such conditions usually originate from sports that involve jumping, executing sudden turns such as soccer or repetitive high impact movements such as running. The Bar Method workout addresses such problems by firming up and 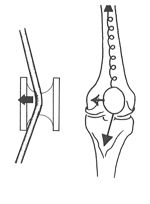 balancing the muscles that run across the knee, thereby giving the joint the added stability via a strong girth of muscle. The Bar Method’s exercises were designed in conjunction with physical therapists with this express purpose in mind. Countless Bar Method students with ligament injuries or moderate joint degeneration have told me that their pain goes away after a few months of classes. 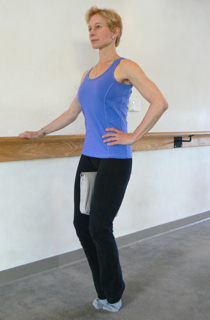 The second group of students usually have muscles running though their knees that are of unequal length and strength. When they bend their knee with a certain amount of muscle power, their muscles pull the knee cap to one side as shown above (usually in an outward direction) causing pain. Runners and dancers for different reasons come down with these conditions more so than other athletes. My favorite modification for this problem, shown to the right, is for students to do thigh-work with just a slight bend in their knees while squeezing a ball or small mat between their thighs. This position helps them to strengthen and tighten their inner quad and leg muscles, helping eventually to make them as strong as those in their outer quad and leg muscles.

The students in the third group, the ones who need additional modifications during class, have a wide range of conditions, each with its own set of causes and symptoms. Before I describe the modifications that these students would use, I want to explain why there are so many kinds of knees injuries. The reason in brief is that the human knee consists of a greater number of parts than the average joint. If just one goes awry, the rest of the knee is affected. Since the knee supports almost the entire weight of the body, when something goes wrong, the situation can deteriorate pretty quickly. 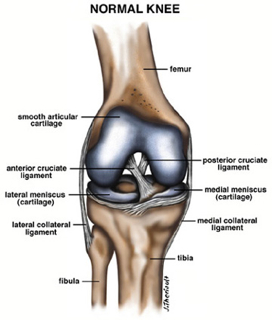 The knee, unlike most joints is composed of not two but three bones: the thigh bone, the shin bone and the knee cap (the patella). These bones are bound together by four major ligaments. Next, numerous tendons run up, down and across all sides of it. (Tendons are the ends of the muscles that operate your knee.) Finally, deep inside the knee joint is cartilage, meniscus, which is kind of sliding cartilage, and several bursae, which serve to reduce friction.

All of these components can misfire, wear out, or get tweaked, creating a multitude of knee issues that, should you have one, will affect your workout in different ways. It’s important to note that if you happen to be someone whose knees are bothering them, it’s important that you see your doctor if you’re feeling persistent joint pain.

Next week, I’ll describe some of the knee disorders that need special attention when you work out, and I’ll give you step by step instructions on how to modify The Bar Method exercises for these conditions.

Click here to read how The Bar Method can be a microcosm of your life.