Stretching Makes you Stronger and More

This year I had the opportunity to take a variety of different fitness classes including some that used a ballet bar. I noticed that the bar classes gave fewer stretches between exercises than what you get at the Bar Method. The intention of these workouts is probably to deliver good results to their students by being as aerobic as possible, a currently popular approach to fitness. But are their students missing out on the body-changing benefits to be gained from stretching?

Sports scientists have researched this subject over the past few years, and they’ve come up with some surprising findings. Three years ago for example, one team of researchers set up an experiment to find out if stretching strengthens muscles. They recruited 16 men and 16 women, all college students in Hawaii’s Brigham Young University. The authors of the study, (Kokkones, Nelson, Tarawhiti, Buckingham and Winchester) divided the 32 students into two groups that matched as much as possible in athletic ability. The members of the first group trained on three different exercise machines for the legs three days a week for eight weeks. The members of the second group did exactly the same routine three days a week for eight weeks. The only difference was that the second group also stretched twice a week for 30 minutes at a time.

Why did the stretching substantially improve the performance of the second group?  The researchers said that, as other studies have found, “placing a muscle on stretch can induce Z-line ruptures and increase protein synthesis and growth factor production.”

I was fascinated to learn that stretching causes “Z-line ruptures” because that’s also how strengthening works. When you do a “strength” move such as lifting a weight, you cause tiny muscle tears that stimulate your muscle to build denser and stronger fiber as it repairs itself. Passive stretching, it turns out, causes the same kind of tears by pulling on muscles, while at the same time strengthening the stabilizer muscles that are maintaining the pose. No wonder I’m often out of breath after a stretch sequence!

With this research in mind, consider what’s happening to your body during the Bar Method’s “stretch at the bar.” When you place your leg on the bar, you can now credit the source of the burning sensation you feel to tiny ruptures in your hamstring muscle fibers, similar to those that occur from strengthening. When you turn your body to the side for the “waist stretch,” your obliques, triceps and back muscles are also being toned as you stretch them. Meanwhile, the heat generated by this work is serving to get your muscles warmed and limbered up for the thigh-work to follow. Last but not least, you feel extra satisfaction knowing that your muscles are doing more than just taking a break during this stretch!

The many research studies recently carried out on stretching have found that it has a lot of other benefits besides making you stronger. Here are highlights from three of the studies that focused especially on stretching’s power to enhance your appearance.

Researchers did a study to find out if stretching makes people more coordinated. They put forty-two college students on a “stabilometer,” which challenges the user to keep his/her balance while standing on it. The students who stretched before standing on the stabilometer significantly improved their balance, by 11.4%. Why? The researchers speculated that “stretching improved maintenance of balance perhaps by helping the subjects to eliminate the gross muscle contractions €¦ and to replace them with fine muscle contractions.” In other words, stretching makes people less “klutzy” by reducing unintentionally jerky movements, thus enabling them to move more smoothly and efficiently. 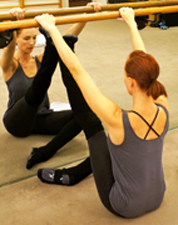 Researchers tested stretching’s ability to reduce blood sugar. Twenty-two subjects drank a large glass of juice. A half an hour later they either stretched for 40 minutes or did a “mock stretching regime” (not really stretching). Afterwards the researchers measured everyone’s blood sugar. They found that the group that stretched had “a significantly greater drop in blood glucose.” High blood sugar stimulates our bodies to convert the sugar into fat. Stretching, it turns out, metabolizes blood sugar, thereby preventing it from being stored as fat.

Finally, I want to mention the long-established connection between stretching and good posture. According to the Mayo Clinic, “Frequent stretching can help keep your muscles from getting tight, allowing you to maintain a proper posture.” Stretching gives these muscles greater range of motion, enabling our bodies to stand up straight and move with more elegance, confidence and grace.

All this evidence shows that the Bar Method’s stretches are not merely elongating students’ muscles. They’re playing a significant role in changing their bodies. Shannon Albarelli, who co-owns a Bar Method studio in Montclair, New Jersey, noticed this difference after she took another barre fitness during her last four years in college. “I liked the class I took in college,” she told me, “but I it was only after I moved to New Jersey and started taking the Bar Method that my body changed.”