What to Expect From Your First Barre Class

“All you need is 20 seconds of insane courage, and I promise you something great will come of it,” Benjamin (played by Matt Damon) says to his son in the movie “We Bought A Zoo.” A first class at the Bar Method is one of those acts that can take a bit of insane courage, and just as Damon’s character promises, great things — in this case getting a more beautiful, healthy body — can come of it.

It’s understandable that that walking into your first Bar Method class takes at least some courage. It has a reputation for being challenging, and friends are often so darned devoted to it that they can make you wonder. These friends are well-meaning, but their enthusiasm for the Bar Method can backfire and churn up inner cascades of self-doubting questions among the uninitiated: “Am I going to get addicted? Will everyone be, and look, better than me? Will I feel singled out when the teacher calls my name? Will I even get through the class!?”

If you’re wondering how you’d do in your first class, I want to reassure you that the overwhelming majority of new students of all ages and fitness levels have a positive experience. Bar Method teachers are skilled at making their new students feel safe and welcome, letting them know what they’re going to feel, explaining the benefits and mechanics of the exercises, and getting them into a focused workout “zone” that makes the hour go by fast. But don’t just take my word for it! Hear about the first day experiences of three students who almost never got there, and were glad they did.

For a long time Rachael walked by the Bar Method studio in Summit without going in. A single mom in her mid-40s, Rachael “dismissed it as an option for me,” she says, “because the word €˜bar’ implied ballerina and that was something I certainly wasn’t.” One Thanksgiving, her daughter came home from college, and the two of them decided to give the class a try. “I changed three times before I left the house,” Rachael recalls, “not sure what to wear. I was sure I would be the only person there who would not be able to lift her leg to her ear. I was so nervous when I turned the corner into the studio, but everyone was so lovely and welcoming. As I made my way through the class, I was amazed at the extensive options given within each exercise€¦options for those who were advanced and options for novices like me. The instructor offered specific encouragement and suggestions to each student using their names! It was clear that each student was so involved in their own progress that no one had time (including me!) to notice anyone else.” 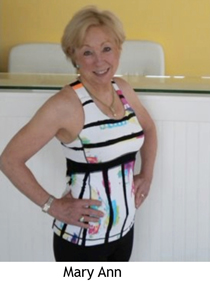 For two years, Mary Ann’s California-based daughter called her to talk about the positive effects the Bar Method was having on her body. Then a Bar Method studio opened in Mary Ann’s area. She was placed on the mailing list but didn’t attend for another year. Finally Mary Ann signed on “and I might add without too much enthusiasm,” she admits, “because I was suffering from a lower back injury. However, once I began taking classes under the watchful eyes of Bev and Maika (the studio’s owners), I was nurtured with kind comments, disciplined corrections and happy faces. I got the message; this is working for me.”

A busy mother of three young boys, Grace would not be dragged to a first class for a long time in spite of the persistent efforts of her best friend Margaret. “I can be a little sarcastic and a physical underachiever,” Grace says by way of explanation. At last Margaret prevailed. “As I entered the class,’ Grace remembers, €˜I was really impressed by the instructor’s desire to not just learn the names of students, but to engage and take a serious interest in each individual’s progress and development. Honestly, on that first day, I was a “D” student, but that did not matter. What struck me is how much and how often these instructors encouraged me and others and made constructive adjustments in order for proper form to be achieved. Also, every exercise is explained along with its function and benefits. It is fascinating to submit to this level of instruction. Not only did it stimulate my muscles, but a switch was flipped in my brain, too. This Bar Method became my Mt. Everest and I was hooked.”

Thank you, everyone, for you support this past year.