Since opening my first exercise studio in the early 90s, I’ve made many changes in the technique as it was taught then. I had not anticipated this role. My plan was simply to teach the exercise method that I had enjoyed as a student over the previous decade.
The story of how I started modifying the original workout begins shortly after I became a studio owner in 1992. I’d spent two years preparing for this event by training and teaching at the Lotte Berk Method in New York City. Now as a teacher and owner I felt an increased responsibility to keep my students safe from injury as well as to give them the results they desired.

Imagine my concern when a few weeks after opening, some students came to me with back, knee and shoulder strains. I located a physical therapist, Rick Stebbins, and showed him our moves. Rick was impressed with our exercise program because it was non-impact and focused on key muscle groups. However, he said, some of our positions could indeed impact students’ joints. The good news was that he could suggest ways to modify these positions so that they were safer. 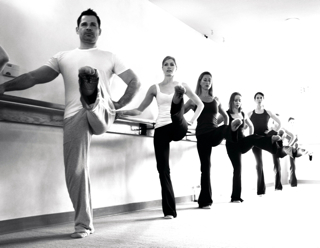 When I put Rick’s changes into place, I made an unexpected discovery. The safer positions were also harder. What Rick had done was re-work our exercises so that students’ body weight fell directly onto their muscles rather than their joints. At first, we teachers had to prod our students to get out of the easier, less joint-friendly poses and into the harder, safer ones. Once everyone grew accustomed to the new form, they grew to love the changes in their bodies. In the following years, I sought advice from more PTs – some of them now Bar Method teachers – and their expertise gave me the confidence to be innovative on an ongoing basis. The Bar Method is like a “living language” that continues to evolve. Consistently, whatever changes we made also gave students better results.

I got so much satisfaction out of this process that I began to look for other ways to update the workout. I looked at how well we paced the class, how effectively we targeted the right muscles, how much more intense and challenging we could safely make every exercise, and whether we could teach it better. Today, thanks to the help of both our consulting physical therapists and my fellow Bar Method teachers, the Bar Method class has evolved in all these areas. It has become, for example, faster paced. Old exercises that used to let students rest at moments have been removed. The remaining exercises are now inter-linked so that the next exercise begins on the last beat of the former one. Students now tell us on a more regular basis that, “the hour flies by.”

The workout has also become more targeted. Former exercises that gave mediocre results are gone. New super-effective sculpting moves have been added. Along the way I’ve been careful to preserve the overall intensity of the Bar Method by resisting the trend towards packing exercise routines with lots of different moves. I learned through trial and error that the more you crowd into a workout the less intense it becomes. Exercises need time to work, and the Bar Method gives them time to get the job done, which is one reason students tell us that the Bar Method has a unique ability to make them feel “done” from head to toe. Read more about how the body sculpting technique works.

Last but not least, Bar Method teachers have gotten better at keeping students in form. The family of exercise to which the Bar Method belongs involves isolating muscles. Without precise positioning, students will miss out. Bar Method teachers, therefore, have learned to work harder to observe their classes and adjust form. More than any other element, this one wins us the most appreciation from our students.