Foodies, Exercise, and The Bar Method

People have varying attitudes towards food. Some people cherish it as a major source of pleasure. Some struggle with eating too much of it, and others are simply obsessed with it. I myself am the type of person who’s relatively uninterested in food. I don’t cook, I eat mostly take-out, and I don’t know much about recipes, restaurants and what makes a meal memorable. For this reason I’ve always found the world of “foodies” somewhat intriguing and mysterious. I learned a little bit from “Julia and Me” (with Amy Adams and Meryl Streep) which taught me that Julia and Julie loved butter and spent a lot of time in the kitchen. 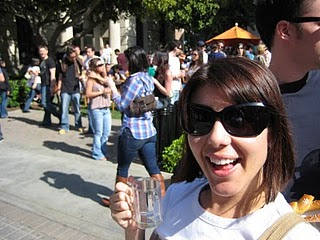 The last thing I would have imagined is that a lot of foodies are as addicted to exercise as they are to food. Recently a Bar Method student named Beth Griffin, who happens to be a foodie, set me straight. Beth is a “food blogger” (another phenomenon heretofore unknown to me) with gorgeous photographs and great recipes at http://www.sweetlifekitchen.com/. We met at a teacher training session in L.A. where Beth was training to be a Bar Method instructor. Foodies, she told me, tend to love exercise, and they blog and tweet about it all the time. When I looked her up on twitter at http://twitter.com/oursweetlife I saw that she had tweeted to a friend: “I’ve made it MANDATORY MONDAYS at #BarMethod, it makes my week so much better & I can burn off wht I ate thru the weekend!”

Another Bar Method studen Diana Hossfeld has a popular food blog http://dianatakesabite.blogspot.com/ In the blog, she describes herself as follows:

Some of the tweets on her profile page on Twitter at http://dianatakesabite.blogspot.com/ are:

“A new way to look at dessert: how many Bar Method classes is it worth?”
“Abs still sore from Bar Method class on Wednesday night – nice change from usual source of stomach pain (eating too much)”

Then it hit me: Food. Exercise. Of course they go together! Where have I been? Foodies need exercise to burn off what they eat. Plus, foodies love physical sensations (butter on the taste buds for example) and exercise, plus its aftereffects, happen to be physical sensations.

To find out if my new theory was right, I asked another foodie who is also a Bar Method-ite to tell me how she feels about exercise. Her answer told me that I my assumptions are right on.

“The more sugar I eat the more time I spend at the Bar Method!” Jamie Cantor told me. Jamie is the owner of Platine Cookies at http://www.platinecookies.com/ – an amazing, highly reviewed bakery with sweets and savories based in Culver City.  She also has been a Bar Method teacher for six and a half years. She confirmed the pleasure-seeking link between eating and exercise: “Chocolate contains some chemicals that interact with the brain to make you feel good. In a similar vein, good exercise sends endorphins that can boost your mood as well. So I really see a connection between being a foodie and a Bar Method junkie!”

Diana of “Diana Takes a Bite” came clean about the addictive appeal of combining working out with eating: “The hunger factor plays a role in the link between physical activity and €˜foodie-ism’,” she said. “Exercise – especially intense exercise – makes us hungry. And food always tastes better on an empty stomach.” Like Jamie, she is also up front about the “calories in/calories out” factor. “I turn to exercise as an antidote for my less virtuous eating behavior,” she admitted.

Foodies, I’ve decided, are some of the most enlightened people around because they’re experts at appreciating the simple pleasures of life. “I’ve been known to buy one pound boxes of See’s chocolates — for myself,” Diana freely admitted to me. “Sometimes I even have the counter girls wrap them up like I’m giving them to someone else.” Who but a foodie could conceive of such a wonderful act of pleasure-seeking whimsy? Cheers!