Taking The Pulse of The Bar Method’s Growth

It’s easy to see that The Bar Method is growing as its studios sprout up all around North America. Twenty-five new locations are currently in various stages of development, some opening over the next month or so like Boston, Austin and Washington DC. What’s not as visible, but just as exciting to me, is The Bar Method’s behind-the-scenes growth. In the past year we’ve greatly changed structurally in the way we lead, and that change is playing a major role in bringing to life my dream of a constellation of Bar Method studios, every one of which provides its students with consistently high-quality teaching of the Bar Method technique. To that end, The Bar Method has recently put in place teams of master instructors to evaluate and oversee every Bar Method teacher and to coach them when needed.

Along with this increase in size and complexity in our company comes a growing deficit of time on my part to get everything done. Time was when I’d always show up at a new studio on opening day to admire the space and teach the first few classes. Now months can go by before I get to a new facility. The St. Louis studio opened last October, and it was not until April that I found a few days to make the trip there. And not only is there less time to travel; there’s also more to do when I’m on the road. On this trip, for example, no way was I going to get away with simply teaching a few classes, if Jen, my director of evaluations, had anything to say about it. “Hey, St. Louis is less than 1,000 miles from New Jersey!” she exclaimed when she found out I was traveling. ” As long as you’re out there, please drop by New Jersey and New York (she really said this!) and take care of these six evaluations that I need done.” I’ll do anything for Jen, who’s an amazing evaluation director, as well as teacher and trainer, so I said, “Sure.” It’s no surprise that Jen leapt at the news that I was going in the direction of where some evaluations were due. There are now hundreds of Bar Method teachers throughout North America, and we have only seven evaluators including myself. 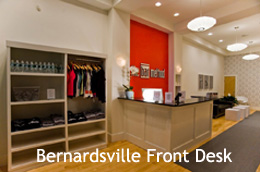 In the end I was happy I’d accepted this assignment from Jen. Otherwise I never would have witnessed an amazing and inspiration transformation one studio made between my opening visit to it and my return one-year later. This studio is located in Bernardsville, New Jersey, an idyllic, pastoral outer-suburb of New York City. The town has a long-standing YMCA, and that was where most fit-conscious residents got their exercise before The Bar Method arrived in January of 2010. Its opening generated so much excitement in the town that when I walked in the door last year to meet my students, it seemed that the entire membership of the Y had decided to try The Bar Method on its first day of business. The place was packed. The problem was, these students were accustomed to the way they had been exercising at the Y, namely while concurrently catching up with their neighbors and friends, and they were chatting nonstop. If you’ve ever taken a Bar Method class at a studio, you know that we ask our students not to talk to each other during class. We believe that when it comes to the Bar Method students get a better, faster-moving workout when they’re not distracted by their neighbors. That first day in Bernardsville I had to stop each of my classes several times to impress upon my eager but noisy students the ultimate benefits of exercising non-verbally.

On my return visit last month, I barely recognized the place. I could have heard a pin drop in the waiting area. The same students I’d met the year before were still there, but now they were waiting for class to begin quietly and with what seemed to me like reverence. When they saw me, they shook my hand and told me their personal stories of how the Bar Method had changed them outside and in. One student said she had rheumatoid arthritis has been able to cut her medication in half. Others showed me their toned arms and talked about heightened self-confidence and well-being. The new Bernardsville teachers I evaluated had also changed. Last year, their motivation for training and becoming teachers was for something fun to do. Last month it was clear that their approach to teaching had shifted to become a dedicated practice. I credit this shift, in large part, to the leadership of the studio’s two dynamic owners, Gina Williams and Melissa Ramsey. The new teachers’ classes that I evaluated sparkled. I was humbled, amazed and touched by this studio’s exquisite interpretation of the Bar Method’s principles and the positive impact this manifestation was having on its students. 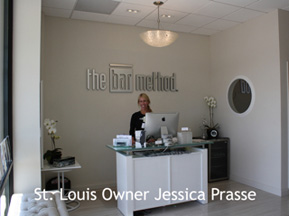 From Bernardsville, I flew to St. Louis and walked into a jewel of a studio. Jessica Prasse, its young owner, had chosen a luscious assortment of creams for the walls, floors and that gave the whole studio the feel of a Fred Astaire/Ginger Rogers movie set. I evaluated teachers there too, and was greatly satisfied to find that the Bar Method technique had transferred well to this brand new territory thanks to our fantastic teacher-trainers and Jessica’s relentless attention to detail.

Last month the Bar Method also became more available via two new home exercise DVDs, “Super Sculpting” and “Super Sculpting II.” A few days after their launch I was delighted to receive many positive comments about the workouts including an email from Switzerland by a user named Daniela that said, “I did both of them and I really love it!”

My thanks, Daniela, and to all of you who wrote in!