Last month, The New York Times reported on the surprising results of two recent studies in exercise physiology, one using rats, the other humans.  Both arrived at the same conclusion, namely that a few minutes of intense interval training produces the same fitness benefits as hours of aerobics.
In one conducted by the National Institute of Health and Nutrition in Japan, two groups of rats underwent contrasting workouts.  One group paddled around in a pool for six hours.  The other group swam furiously for 20 seconds while carrying weights, then rested for 10 seconds for a total of 14 sets of swimming and resting.   At the end both groups showed equal increases in endurance.

In the human experiment conducted at McMaster University in Ontario, one group road stationary bikes at a normal pace for about two hours, and the other group biked to exhaustion in 20 – 30 second sets interspersed with four-minute rest periods for a total of two to three minutes.  Again, both groups showed the same fitness improvements.

So can we simply cut our exercise to a few minutes a day and look like David Beckham?  We can look forward to a heated debate on this subject at some point.  What these studies do shed light on right now is why workouts based on interval training such as The Bar Method produce results so fast.  Students at the Bar Method are routinely dumbfounded at the results they get from an hour-long, non-impact class performed sock feet: “I am still amazed at how sculpted my arms are,” one emailed recently.  “I was surprised to see my biceps pop so quickly,” wrote another, and from a third: “I cannot believe the change of shape in my legs.  It is amazing!” 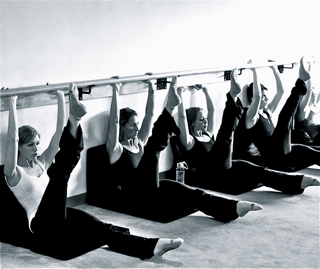 The mechanism that caused these changes is the same one tested by the physiologists: interval training.  Strength intervals within a Bar Method class are, like the sets in the experiments, brief and extremely intense.  “Triceps push-ups” for example, a 30-second exercise that occurs about 10 minutes into class, induces such an intense muscle burn (if done Bar Method-style with the shoulders directly above the wrists) that students’ faces and chests can flush deep red.  Thigh-work is similarly brief and intense.

The burning question remains: Why do bodies – human or otherwise – change just as much after short sets of intense exercise as they do after long laps of moderate exercise?  One possible answer is that our muscles are not designed to do long aerobic workouts.  What we humans were actually doing when our muscles completed their evolution about 50,000 years ago were “a multitude of tasks involving rigorous physical exertion and then rest,” (according to a paper called   “Physical Activity, Energy Expenditure and Fitness: An Evolutionary Perspective”).   The authors pointed out that, “€¦the activities of our ancestors, while demanding, lacked the efficiency of physical exercise conducted according to the tenets of modern exercise physiology.”  And they speculated that, “It might be possible to attain similar physiological effects with less time expenditure;” and suggested that, “investigations designed to explore this possibility are needed.”  It’s good news that these investigations are now underway.

Read more about our evolution and the human being’s special need for core strengthening exercises.