Exercise makes many people less hungry. Men as a group have been found to be largely immune from increased appetite after exercise, and may even become temporarily “anorexic” according to a 1994 study conducted in the U.K. by Leeds University. Previous studies at Leeds found that this suppression of appetite can last for up to two days.
Some women also experience the same appetite-suppressing effects from working out. Sara Giller, a comedienne, Bar Method teacher and desk manager at the Los Angeles studios, was heard to say recently, “Days when I exercise, I never want to eat. When I’m just working at the desk, though, I’m noshing all day.”

At the same time, many women exercisers are made somewhat more hungry by their workouts. An experiment conducted in 2007 by the U.K.-based Journal of Endrocrinology that included female subjects found that the subjects did feel hungrier after exercising, but, if left alone with food, consumed about a third fewer of the extra calories than their workout burned for them, thus achieving a caloric deficit overall.

At the other end of the spectrum there are those people whom exercise makes ravenous. This month I got an email from a Bar Method student named Andrea describing her struggle with this issue:

“I’ve been in love with the Bar Method for over a year,” Andrea wrote, “and have seen great changes in my body.€¦however, I feel as though my diet is all that is holding me back from seeing results€¦ Is it normal that I feel hungrier than usual all day after doing a class? If yes, what is the best food to satisfy my post-workout hunger?…What does your daily diet look like? I would really appreciate any feedback.” 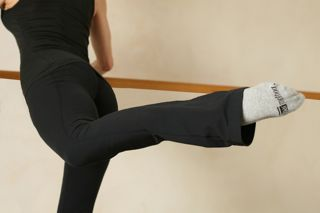 First of all, for Andrea and others who run into this road-block to body-change, there is good news on the horizon. Past Bar Method students with this issue have reported to us that their appetites revert to normal after about six months of classes. It is likely that their initial hunger was being caused by rapidly increasing muscle mass, an essential component in body reshaping. (Here’s a blog I did on how the Bar Method builds and sculpts muscles.) During those first six months or so, students’ bodies also burn away a significant amount of intramuscular fat, which thereafter no longer needs to be fed. After that time, their leaner bodies are feeding muscle not fat, and their appetites revert to normal or even become a bit suppressed. Men probably don’t fall prey to exercise hunger, unless they are body-builders, because their bodies are genetically predisposed to have leaner, denser muscles than women, even without exercise.

Okay, but how do students cope with the raging hunger in the meantime? I thought about what to advise Andrea. I knew that people can learn to be okay with feeling a little hungry, but they can’t cope with feeling ravenous. Minimizing her risk of feeling famished by keeping her blood sugar level steady would be foremost. I included elements of my own eating habits and sent Andrea these tips:

– Avoid eating sweets during the first six months that you take the Bar Method. Staying away from sweetened foods will help your body burn away fat more quickly.

– Drink water slowly. It will relax your stomach.

– When you go to bed, feel just a bit hungry but not starving.

I pressed “send” and immediately remembered that I had right at my fingertips a wealth of fantastic advice on dieting that I hadn’t included. For eight years The Bar Method has handed out an article by Consumer Reports called “The Truth About Dieting,” which is mind blowing, especially for those who’ve  gotten caught up in all the hype in the media about losing weight.  “The Truth About Dieting” is packed with eye-opening – and entertaining — scientific information on how simple changes in diet – with the help of exercise – can cause you to eat less and lose weight. Wow, I thought! This is MUST reading not just for Andrea but for anyone who’s ever wanted to take off a few pounds. The article is not available in its entirety online, so I will describe its highlights – including six tips for losing weight and keeping it off in next week’s blog.