Dispatches From The Edge: The Inner Workout

Here’s a question I get asked sometimes: How can such a simple-looking workout stay fresh, and even get better over time?  Take a Bar Method class, and unless you’re a first-time student, you know that you’ll be doing about ten types of exercise in a set sequence, that this sequence will stay pretty the same and that you’ll be performing small, precise movements during most of the class. This quasi-mathematical approach to exercise would not on the surface seem exciting enough to keep people coming back for months and years. But for most Bar Method students, that’s exactly what it does. The longer they do the workout the more interesting it gets relative to other forms of exercise. “I’ve had a real problem sticking to most exercise programs,” a Chicago student named Christina told me. “but I really enjoy this.” Other students like Kate Forte, a TV writer/producer, tell me simply, “the more I do it, the more I fall in love.” 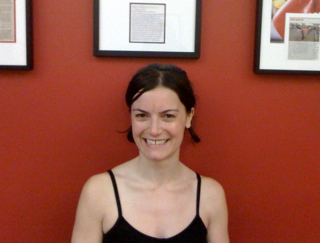 What’s going on in a Bar Method class that has this effect on people? Last week a Bar Method Chicago instructor named Mandy Rinder took it upon herself to find out.  Mandy had just begun teaching the Bar Method and felt she was having trouble connecting to her students. To gain insight on how her students were feeling during each exercise, she decided to chronicle her own emotional journey through class.

What Mandy wrote sheds light on the inner thrill ride most Bar Method students are really on underneath the often calm surface appearing on their faces.  Mandy’s inner world while doing the class is a rugged landscape inhabited at different moments by self-doubt, challenge, ego, individual artistry followed by flashes of camaraderie. It is scrappy, mysterious, layered, and at times funny. Here’s a selection of her “dispatches from the edge:”

Push-ups:  “I still feel a moment of doubt or worry at the beginning of each set that THIS is going to be the time I’m going to have to drop back down or stop entirely.  I want to feel a huge rush of exhaustion and pride at the end…”

Thigh-work: “I think everyone knows and views ‘thigh’ as sort of a €˜test’€¦the image of egos dripping off the walls of the studio seems applicable. I again feel that tiny moment of self doubt at the beginning of the set, and often it flashes again during particularly challenging sets, as I wonder if I am going to have to come out of the position or work higher€¦This is immediately followed by that rush of adrenaline and excitement that stiffens my resolve to keep going.”

Seat-work: “I literally feel like a sculptor creating my body.  It is a very individual part of class for me. Everyone is working on their own individual piece of art, and there is less of the camaderie that I feel during thigh or say flat-back.”

Fold-over: “I think of fold-over as kind of the redheaded stepchild of seatwork.  I used to hate fold-over, probably because it feels more €˜blunt’ and less subtle and beautiful than the other seat exercises. Over time I have developed a grudging truce with fold-over, pretty much because at some point I realized that it really worked.  It’s kind of a scrappy little exercise, and because it works my booty AND burns all that extra fat, I will accept it as a means to an end.”

Curl: “The exercise feels very layered to me, like you are unlocking different levels of the exercise.  Curl almost feels like a dive to me. You just keep going deeper and deeper into the exercise.”

Your terrain might look different from Mandy’s as you make your way through class.  Even so, if you’re a regular student, you probably travel an inner landscape that’s just as colorful as hers, and that gets more interesting with each class you take.