Evolution, Work and Working Out, or Why People Need Muscles

Have you ever have ever had a problem with your shoulders, back or knees? Last year, I was giving a talk at the famed destination Spa Rancho La Puerta in Mexico and I asked the members of the audience there that question. Nearly everyone raised their hand. The odds are that you have had some of these issues, too.  Most people suffer discomfort or disability in these areas at some point in their lives.
Why are people prone to having weak knees, bad backs, and unstable shoulder joints? The reason lies in man’s evolutionary journey from four legged creature to human being. The human muscular structure was originally designed to fit a four-legged frame, one we still share with most other mammals. It may seem strange to us that an elephant, a four-legged animal, has two scapula, a sternum, two humerus bones, two ulna bones, two femurs, patellas, tibias and fibulas just as we do. 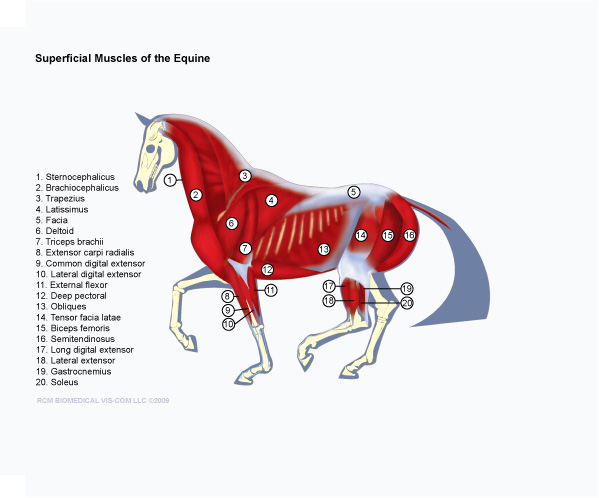 You can see in the picture above how many muscles we share with horses including traps, lats, pecs, biceps, triceps, glutes, quads and hamstrings. As our bodies evolved, we humans gained arms, hands and bigger brains. These additions provided us with spectacular survival skills but our evolution came at a price.

One significant difference between our anatomy and theirs is that horses and elephants have a limb on each corner of their torso like a table. You probably wouldn’t design a table with two legs leaving the rest of its structure hovering vertically in space. Neither would evolution unless it had a really good reason. Evolution built us the way it did to enable us to have an extraordinary spectrum of survival skills including building dwellings, making clothes and fires, hammering out tools and weapons and then hefting and throwing them, climbing trees and mountains, traveling with our children and possessions on our backs, and chasing down other mammals as well as running from them.

Most mammals have a relatively simply survival strategy. They hunt down their prey, breed and take care of their young. When they’re off work, they sleep. We, on the other hand, survive by keeping busy.  Even with our vulnerable two-legged structure, we evolved to become the best overall athlete of all animals. Other animals can beat us at individual skills like running and strength. We would win the best average of all physical skills combined, and until fairly recently every human alive was an athlete living a life of non-stop, bodily multitasking.  Compared to other animals, we are built to be total physical workaholics and the muscular system that resulted protected our bodies like suits of armor.

Contrast this lifestyle with today’s. Before age one we might be placed in a baby walker. Our parents toted us around in strollers, then in cars. We got to play, but soon we were in school at desks, and after school in front the TV. Later we became transfixed by computers and cell phones. In our youth we participated in sports for a few hours a day give or take. Finally we settled down with American Idol, Facebook, Twitter and texting. 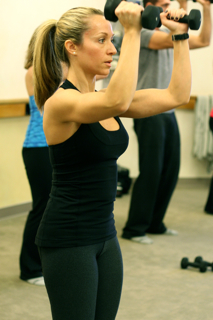 So here we are with a two legged body that has been radically altered to suit this A-type physically active, multitasking creature. The very activities we humans had to perform to enable us to survive also protected our joints and backs by keeping us super-fit. Yet we’ve now multitasked ourselves right out of the need to be active with our bodies. I’m not knocking this amazing achievement. However, the drastic adaptations that evolution made to our bodies left us with a number of physical weaknesses, especially in our shoulders, backs and knees that can only be overcome by building a very strong muscular structure, something that was a natural result of all the survival activities man used to engage in.  (Read WHY BAR METHOD CREATES MUSCLES THAT ARE SUPREMELY FIRM, LEAN AND SHAPELY for more on how Bar Method workouts build muscle.)

The situation today is that we no longer have the high level of fitness – and the muscles that result from it – that was once an inevitable part of our lives. In the next three weeks, I’ll take look at the three parts of our bodies – our shoulders, backs and knees — that are especially vulnerable to injury, and examine how exercise can re-endow these areas with the stability they need.