Since the 70s, millions of active Americans have been led to believe that aerobics slims you down and strength work tones your muscles.  The truth is not so simple.

In fact most kinds of exercise that keep us moving continuously for more than a few moments, strength work included, are aerobic.  Stored fat is our most convenient energy source, so our bodies use it as soon as possible, that is, after you’ve finished the warm-up stage of your workout.  Walking, running, vacuuming, anything that raises your heart rate above resting level, burns both carbs and fat.

The question we should really be asking is: how do we maximize the number of fat calories burned from exercise?  To find this out, experts now rely less on how aerobic a particular type of exercise is, and more on how intense it is.  Want to know which exercise routine to choose when you’re trying to drop a few dress sizes?  Experts now suggest you rank them by level of intensity.   Pretty straight forward: work harder; use more fuel. 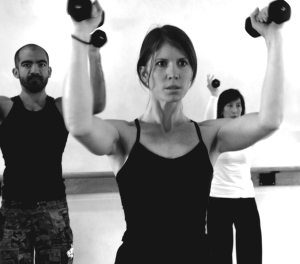 So how do you determine intensity?  Think back to that old adage: “feel the burn.”  The burn in your muscles is a good clue that your workout is getting intense.  To find out just how intense, try clocking the amount of time you spend during your workout while experiencing a muscle burn.  If it’s zero, you’re not using a lot of calories.  If it’s a good part of your workout, you’re cooking with fire.  Want to up your caloric expenditure?  Increase your level of muscle burn until you can barely continue.  Now you’re cooking with dynamite!

Using intensity as a gauge, you can now see through the old adage that walking’s a better fat burner than running.  Truth be known, walking does not burn a lot of calories per minute of exercise.   Go for a two-hour run and you’ll burn about a half a pound of fat.  You’d need to walk for five hours to match that result.  Yes, compared with running, walking can burn a somewhat higher proportion of fat calories than it does carbs, but compared with running, it simply does not do a good job when it comes to burning total calories.  Intense aerobic activity burn calories like crazy and so is doing away with a lot more fat calories per minute of exercise, even if its fat-to-carb ratio is lower than that of walking.   Bottom line: walking is not an efficient calorie burner because it’s not intense exercise.

For the same reason, yoga and pilates use relatively little energy.  Kick up the intensity with running, biking and other aerobic sports, and you get a much better result: more calories consumed and a gain in aerobic stamina to up your caloric burn during your next workout.

Granted: Running, biking, rowing and other high-energy exercise all do an okay job on the “calories out” side of the fuel equation.   To do better – to burn even more calories during exercise and to drop even more jean sizes – you’d need to up the level of intensity you experience during aerobics.  But how?

Recently a new student walked into a Bar Method studio to sign up for classes.  “I’m going to take the Bar Method once a week, because I love it,” she told the front desk manager.  “But I’m trying to lose some weight, so I’m going to run on the other days.”  If this student had chosen instead to take the Bar Method four days a week, she probably would have ended up a dress size or two smaller.  Like this student, most fitness consumers believe the best remedy for extra pounds is running.  It’s only when Bar Method students see their bodies shrink beyond what they were able to accomplish by running do they begin to understand that there’s something more you can do to shrink your body besides run. To read how Bar Method shapes muscles as well, read How To Sculpt a Dancer’s Body.

The problem with running is that by its very nature it’s limited in the degree of intensity it can produce.  Unless you’re planning a brief sprint, running leaves you no choice but to proceed at less than top speed, simply in order to keep going.  If you did attempt to run at top speed, your body would give out after a few moments.  This is running’s catch 22:  It challenges you, but there’s a kind of glass ceiling of intensity beyond which it won’t let you go.

Click here to find Bar Method exercise classes near you.

About The Author Bar Method

Over 100 studios in the US and Canada FIND YOUR STUDIO

Three New Bar Method Moves You Can Do Anywhere

3 Reasons Why You Shouldn’t Skip on Bar Restore

Trying to Decide Between Yoga, Pilates, and Barre? Here’s Why Barre Is the Perfect Choice For You