“The Four Horses” One More Lesson From My Father

Reading Mastery, a book about learning by my father George Leonard, inspired me to rethink how I taught exercise. Last week I shared with you Mastery’s advice on sticking with learning something even though you’re frustrated by your lack of progress. This week I want to tell you about one more insight I got from Mastery that has had a lasting effect on me. This piece of wisdom originated from a Zen parable called “Good Horse, Bad Horse.”  My father retells it as follows in Mastery.
“In his book Zen Mind, Beginner’s Mind, Zen mastery Shunryu Suzuki approaches the question of fast and slow learners in term of horses. 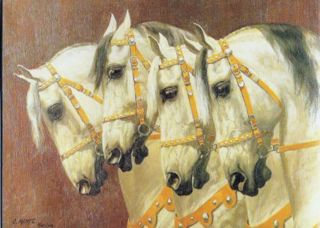 It is said that there are four kinds of horses: excellent ones, good ones, poor ones, and bad ones. The best horse will run slow and fast, right and left, at the driver’s will, before it sees the shadow of the whip; the second best will run as well as the first one, just before the whip reaches its skin; the third one will run when it feels pain on its body; the fourth will run after the pain penetrates the marrow of its bones. You can imagine how difficult it is for the fourth one to learn to run. When we hear this story, almost all of us want to be the best horse…’

But this is a mistake, Master Suzuki says. When you learn too easily, you’re tempted not to work hard, not to penetrate to the marrow of the practice. The best horse, according to Suzuki, may be the worst horse. And the worst horse can be the best, for if it perseveres, it will have learned whatever it is practicing all the way to the marrow of its bones.”

At first glance, this parable sounds ridiculous. Obviously a talented person would learn skills better than a slow, maladroit one, right? I decided to find out if there was any truth in this notion by paying closer attention to the performances of my less talented teachers. After a year or so of observation, I was amazed to discover that there was actually something to be learned from the “Good Horse, Bad Horse” parable.

Some of our teachers who started out to be terrible ended up making amazing changes in their teaching. The opposite was true for a few of my most apparently gifted instructors. The first teacher I ever trained in 1992, for example, instantly picked up the lingo of the classroom. She had such a facility with words that my staff teased her about sounding “like a little Burr clone.'” Unfortunately, this teacher turned out to be a classic “first horse.” The superficial skills of the job came easily to her probably as a lot of things had in her life. The problem for us was, she never took class, had no idea what her students were feeling during the workout, and had no desire to connect to them or apply herself. A few months after putting her on the schedule, we fired her. 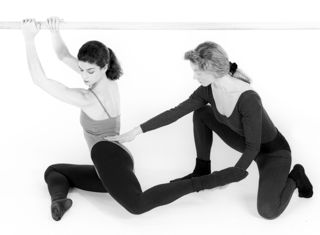 Another one of my teachers named Susan (at left with me in 1993) was another story altogether. Susan had a very stiff back and could barely get into the abdominal “curl” position. After months of struggling to get better at curl, Susan gained a deep understanding of the exercise and became the best curl teacher we’d ever had. My partner Carl and I started to appreciate the advantages of having a “fourth horse” on our staff.

Soon we opened our eyes to the possibility that our students as well as our teachers could be “first horses” or “fourth horses.” We saw that our hardest working students and not necessarily our best students were the ones who were on their way to transforming themselves. Students who “got the tuck” the first day weren’t necessarily the ones who went home with the best results after two years. It was in fact some of the less conspicuous members of our classes who were on the trajectory towards the most dramatic changes: Students with very tight hamstrings who patiently spent a year stretching at the stall-bar (where there are lower rungs) until they gained the flexibility to put their leg on the regular bar; students with little body awareness initially who at long last learned to stand up straight and pull in their abs; even students who used every excuse in the book to tell us why they couldn’t get to class regularly and finally managed to carve three hours a week out of their lives for exercise – these students, our “fourth horses,” became in our minds our race horses.

When you walk into a Bar Method studio today, the first thing you notice is its welcoming atmosphere. Staff and teachers alike share the conviction that everyone – anyone – can improve if they work at it. I credit in part the “Good Horse, Bad Horse” parable for teaching us to embrace the potential in everyone.