The Secret Behind Learning the Skill You’ve Always Wanted

THE SECRET BEHIND LEARNING THE SKILL YOU’VE ALWAYS WANTED 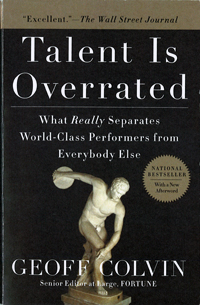 I read a fascinating book this week called “Talent is Overrated” by Geoff Colvin that explains a puzzle about the Bar Method that I sometimes get asked about: why do students never get bored with the workout even though the exercises don’t vary greatly from class to class?

At first “Talent is Overrated” didn’t seem any more enlightening than other books about the powers of practice such as Malcolm Gladwell’s, “Outliers”. Then it around page 50 it pulls the rug out from under you with a surprising premise: Practicing by itself, the book states, is not an especially good way to learn. “Extensive research in a wide range of fields shows that many people not only fail to become outstandingly good at what the do, no matter how many years they spend doing it,” Colvin says, “they frequently don’t even get any better than they were when they started.” So what in his view does enable people to master a skill? Colvin says it’s something called “deliberate practice,” which quite a different kettle of fish from just doing something repeatedly. Here are the components of “deliberate practice”: 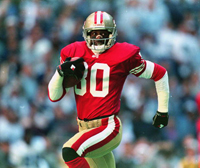 Colvin cites as an example the practice routine of a legendary athlete. “Jerry Rice was the greatest receiver in NFL history,” he writes. “Of all the work Rice did to make himself a great player, practically none of it was playing football games.” Instead Rice worked separately on speed, endurance and specific plays. Colvin’s point is that to get better at a skill such as tennis let’s say, it’s not enough to play the game. You have to work specifically on what you’re worst at, perhaps your back hand, and get feedback and guidance from teachers and other players.

Deliberate practice over time, Colvin says, is an awesome resource we all can tap into if we want to master a skill, and you don’t even have to start with smarts or talent. “Researchers have found that some chess grand masters have IQs that are below normal,” he writes. The same was found with many masters of the Japanese board game “Go” and financial whizzes. These people reached the apex of their disciplines by spending years of deliberate practice on specific skills under the guidance of teachers. The inevitable conclusion is that, as Colvin states in the book’s last lines, “Great performance is not reserved for a preordained few. It is available to you and to everyone.”

It’s a cool notion to think that we all possess a wealth of potential for developing new skills or significantly improving the ones we already have. We need only to design our practice time so that it targets the areas we most need to improve on, seek the guidance of a good teacher, and invest in years of deliberate practice. The question is, can you apply this kind of commitment and dedication to an activity that most of us usually don’t think of in terms of mastery such as group exercise?

If you take a close look at the Bar Method’s approach to teaching, you’ll find that the answer is yes. The principles Colvin talks about can be used even in the realm of fitness. Bar Method teachers, for example, do much more than lead their students through the exercises. They give frequent feedback on their students’ alignment, posture and mental focus. In one exercise a student might be complimented on the straightness of her leg. In another she might be instructed to square her shoulders. Other students hear and learn from each others’ pointers, and this generates an overall heightening of awareness in everybody. The interactive nature of a Bar Method class adds a dimension of mental involvement to the workout that engages students’ minds more and more deeply over time. Best of all, the feedback produces cumulative changes in students’ bodies and mental focus, making them increasingly eager to receive it. Students discover over time that there is a deep satisfaction in the task of improving their performance.