Once again, we’d like to thank the thousands of the Bar Madness participants across the nation! You guys rocked it!
We also want to recognize the local winners at all participating studios! These teams showed exceptional dedication during the challenge and deserve a special shout out.

We’d also like to share some amazing stories of the local winners that were submitted by our Studio Owners!

Kris is 62 years old and took class everyday during the challenge except for Easter and a snow day, which were days that the studio was closed. She recently completed her 740th class!

Stacey is 52 and also took class everyday except Easter and the snow day during the challenge. She recently completed her 469th class!

The final day of Bar Madness was the 100-day mark before Sara’s wedding. She’s slimmed down and become so strong since coming to Bar Method, and we’re really proud of her. The two of them are also part of a group of women at our studio who have become really great friends and even just had a “Bar Bachelorette” for her. 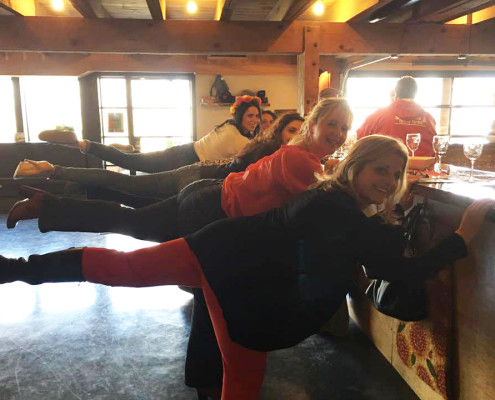 The Bar Madness winning team for the Hingham studio is the Arabesties – Callie Shanahan & Darcy Woodyatt. They each came to class nearly every single day during the past 5 weeks and managed to knock out the teams we originally pegged as most likely to win. They both work full-time jobs at a local school and are 50 years old (or as they like to say “together, we’re 100”). Darcy, a single mom, has 3 kids and Callie has 4, including triplets! It was no easy feat for them to accomplish all they did during this challenge. They organized special carpools, went into work late some days and re-scheduled family events just to be able to make sure they made it to class. So many members of their school and our community have been cheering them on. It was amazing to watch them take Bar Madness as their 50th year challenge. 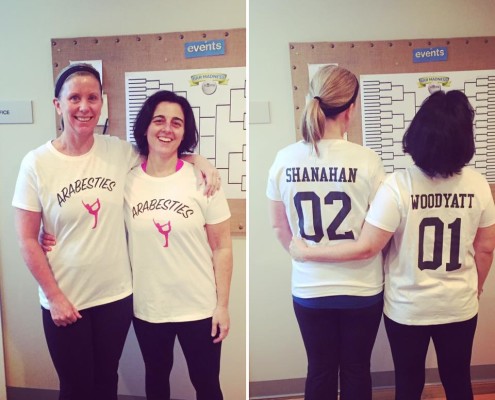 Yunji De Nies and Ashley Nagaoka – The Bartenders are both in local TV (Ashley used to be and now is in PR) and ridiculously kind. They have lots of aloha spirit in them!

Yunji De Nies is kind of a local celebrity as she’s an evening anchor for KITV.  She just finished filming a segment at the studio.

The Miami winners are Marie Mato and Betty Lopez-Castro. Their team was “Brunch N Crunch”.

Betty works in banking. She joined The Bar Method Miami in 2012 and has taken 572 classes. Before The Bar Method, Betty had never stuck with any exercise routine for more than 6 months in her whole life! During Bar Madness, Betty had to go to New York for work. She took class twice at The Bar Method in Manhattan.

Michele has been with us since the very beginning and brought her good friend Alyssa on for the Bar Madness challenge and this is how Alyssa started her career at the Bar Method, by taking classes every single day!  INCREDIBLE! 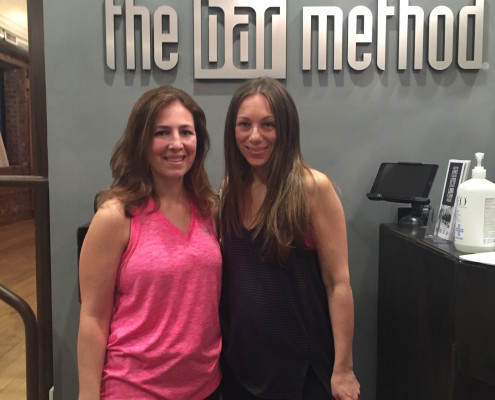 Patti Foley, one of the winners at the Naperville studio, offered her insight into the challenge:

“I think madness was a great word to describe this challenge and I would do it all over again! I learned that I can take an early class and still survive the workday and I took my first level 2 class and made it through! I even dropped a pant size. 34 days in a row was easy with a team like yours cheering us on! Thanks for all you do!” 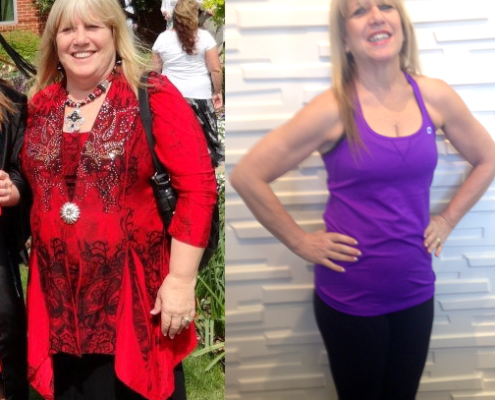 My road to fitness didn’t begin at Bar but this has been the final leg of my journey back to health and well-being. After all, it’s not how you start, it is how you finish. My journey started around eight months before discovering The Bar Method and joining this great group of people. Between working many hours, getting my two children through college and taking care of elderly parents, life got stressful and before I knew it, I weighed almost 200 lbs. I could have continued this way but it was time for the light bulb to come on and to do something about it!

The week before my daughter’s college graduation, I decided it would also be my graduation. My goal was to lose weight and regain my old self back the old fashioned way – through proper eating and working out. I began working out with a trainer and while there were many changes in the months before discovering the Bar Method, my body was wearing down from the constant pounding on my joints at the gym and I had reached a plateau in weight loss.

My daughter, Shelby, kept advising me that there was a better way to reshape your body in a great environment. I didn’t believe that the kind of workout she was doing would have any effect on me but I decided to give it a try. Needless to say, I was converted my first day!! I found wonderful motivating instructors and welcoming fellow classmates that I enjoyed being around.

Each class I would up the ante and challenge myself to push even further. It has been fun to not only see the physical changes in my body but also the emotional benefit I feel.

And best of all, I am 65 pounds lighter with new muscle definition!  I just passed another decade but I feel better than I did at 20!

Here’s a fun tidbit about Jane’s teammate Lilis:  She NEVER wore a sleeveless shirt until now, after she finished the Bar Madness challenge!  She said it was scary, but she feels good in it!

Point Loma San Diego’s winner was M&M Shakes: Mitch & Michelle Yantos. They ended up beating their daughter/god daughter team and also were the studio’s  testimonial of the month: 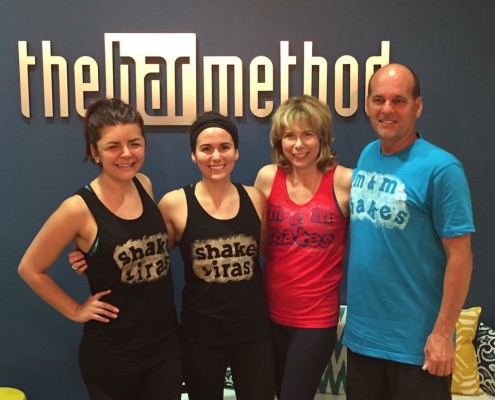 “And so it begins€¦the front door swings open€¦ “Mom, Dad, I signed you up for classes at The Bar Method. You are going to love it!” Uhh…? A glimpse of fear appears upon our faces, but we agree to go. Our daughter, Nicole (a Bar regular since October 2015) and our goddaughter, Diana (a Bar regular since December 2015) will hold us accountable.

Mitch had shoulder surgery in May of 2015 and had limited flexibility. He was given exercises to do at home and did them, however, it was not enough. He had a difficult time trying to reach his arm above his head without someone there to push him through the pain. We were walking a couple of miles about three to four times a week to keep active, but we never noticed any physical changes. We both had poor posture, aches and pains in our shoulders and lower back and we were blaming it on age – but neither one of us were willing to give up that easy. Age is just a number€¦ It was time for change! We needed discipline and someone to push us past our comfort zone while keeping us safe from injury.

We honestly felt things working immediately from the inside out. All the instructors are the BEST!!! They work with you on any modification you may need and encourage you to take the challenge options to work your body to its maximum capability. It is amazing how the slightest modification such as relaxing your shoulders during “flat back” or tucking your hips can make the exercises that much more challenging and effective. The instructors are so knowledgeable and truly care about your well-being.
We are empty nesters and enjoy doing The Bar Method together. We continue to attend classes 4 – 5 times a week. In addition, we have learned to speak a little French€¦ “RelevÃ©.” We are up and hip (or is it hip and hop?) on all the latest jams€¦ “Gotta g-g-g-get get get get get that Boom Boom Pow” and we have rhythm (“tuck, tuck, tuck, tuck”)!

Anna Vonroseenstiel (right side of the photo) & Liz Carter (Team Grump) made different colored shirts with their team name on them and wore them each day throughout the challenge!! 🙂 They both have been very impressive throughout the challenge, and they inspired other teams to create their own team apparel as well! Also, these two are business partners and own the company Carter & Rose. 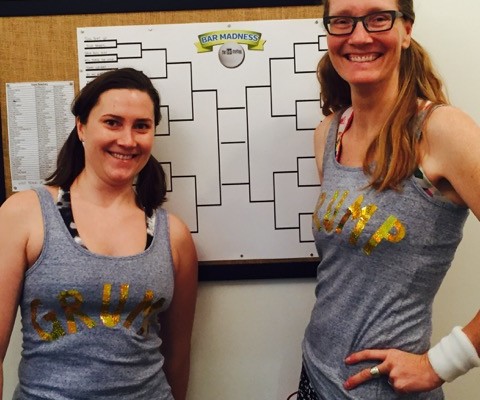 Team Donkey Kong took a total of 80 classes in 42 Days!

Eliza Whittaker took 41 classes, the only day she missed was Easter because we were closed. Kat Kelly took 39 classes, missing 3 total and one of them being Easter! The final week came down to a tie-breaker with both teams all coming the max amount 7 classes per person. The studio finalized their tie-breaker by who as a team came the most since the challenge started.