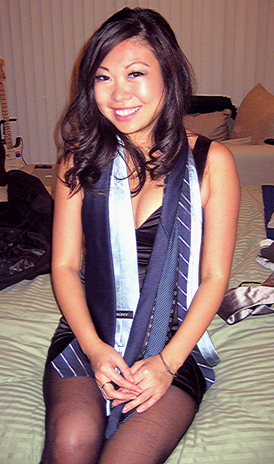 My last two blogs featured testimonials by two of the three contestants in our San Francisco Marina studio’s annual 3|60 Challenge, Karen Dodge and Ryan Salma. To fill you in if you didn’t read last week’s post, the Challenge pits three beginning Bar Method students against each other for sixty days of class taking and testimonial writing. The contestant who turns out to be best overall new student in terms of attendance, enthusiasm and gains in health wins a month of free classes. The winner this time: the third contestant in the Challenge, Lianne Zhang. “The other two did well,” studio manager Mike Najjar told me. “Lianne won because she was here quite often, and she was so enthusiastic.”Lianne, 26, is a brand promotion and event strategist who recently moved to San Francisco from New York City. She had worked 70-hour weeks during her four years in New York. Now that she was a San Francisco resident, she was determined to create a more livable pace for herself. “I wanted to embark on a new lifestyle,” she told us, “one ensuring me a good work/life balance – a concept foreign to New Yorkers.” After a month of classes, Lianne noticed that the Bar Method was doing more than improving her appearance. It was also having a positive impact on the way she was experiencing her new, adventurous life in San Francisco. This is how she describes the differences she felt in her body during her travels around San Francisco week four into the Challenge:SF MARINA 3|60 BLOG: LIANNE WEEK #4 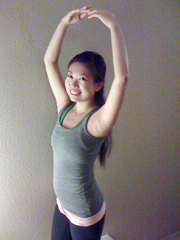 I can’t believe four weeks have flown by. As I notice differences not only in my lifestyle choices but my body- I’m also noticing how useful Bar Method technique is to my everyday life.

Here’s a little guide to how Bar Method has improved this recent transplant’s daily life in SF:

1) It absolutely trains you for crowded places where hanging off various street fixtures is a necessity in order to gain full view of the event.

For example, I went to the Giants Parade and in the madness, the only available space that offered a decent view of the players’ float was to hang off of these metal gates. Because of the Bar Method, I was able to hang on for a full thirty minutes- it was all the Posey, Lincecum, Huff and Cain I needed to bring myself closer to being a San Franciscan!

As a former New Yorker, I tend to ride subways better than buses. In fact I am not a fan of buses. Since I live in lower Pac Heights, I’m forced to take buses anywhere that I can’t walk to. I tend to tumble all over the place as I’m not used to standing on lurching vehicles above ground. However, ever since I started doing Bar Method, I found myself able to use my core muscles to stable myself much better. It sounds silly but it’s been extremely helpful. As for the lady that likes to booty shake at the front aisle of the 22,€¦no amount of Bar Method will remedy.

3) It strengthens my muscles, allowing me to have the confidence and capabilities to try things I never could try before.

I’ve always wanted to try rock climbing but because I have an embarrassingly low amount of upper body strength, I always put it off for fear of making a fool of myself. However, since I started doing Bar Method, I’ve realized that my arm strength has increased significantly and tonight I am going for my first session! Wish me luck! (Especially after five straight days of Bar Method!)

Congratulations, Lianne, for being our 2010 3|60 Challenge winner!